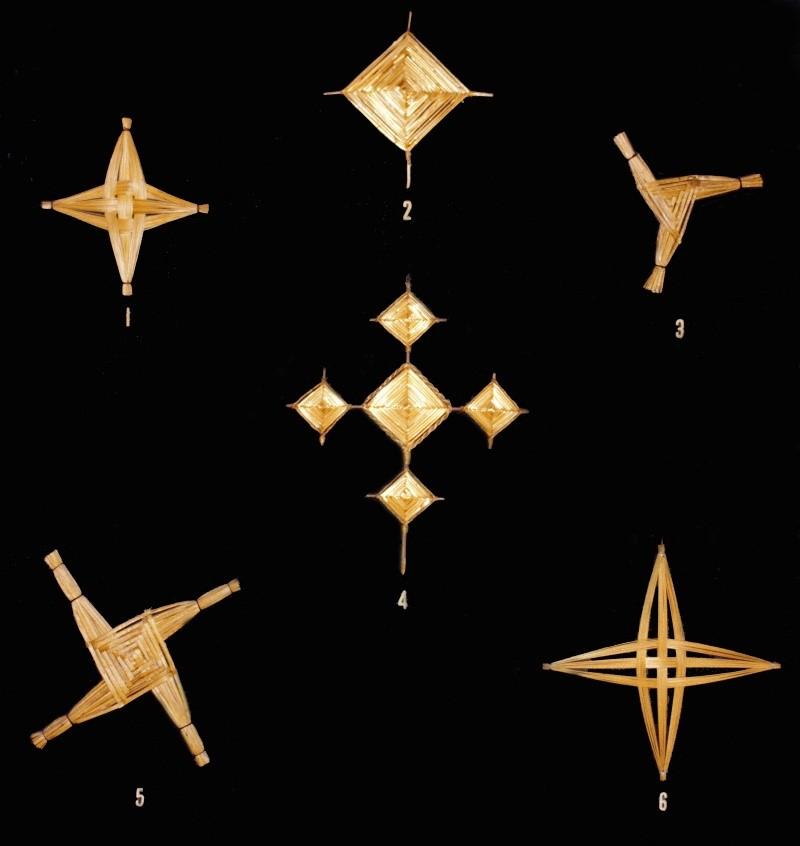 St. Brigid’s day marks the first day of spring, a turning point in the year when light begins to return and new growth starts to take root. A local account from Swords records that:

St Brigid's day which falls on the first of February is a great feast day in Ireland since St. Brigid was one of our great Saints. This day is a day of charity on which the rich people and the farmers, though not too rich themselves give butter eggs and milk to the poor and needy.

Other accounts from Fingal emphasise the importance of making crosses from straw or rushes on this day. This local tradition was part of a wider system of beliefs and customs practiced all over Ireland as part of the festival of St. Brigid. The most popular practice happened on the eve of the festival when a member of the household usually the eldest girl went out to collect rushes which were always pulled and not cut. The gatherer would then lay the rushes on the doorstep of the house, knock on the door, and walk around the exterior of the house three times before calling out ‘Get down on your knees, open your eyes and let Brigid in’ while those on the interior of the house replied ‘’Welcome! Welcome! Welcome to the holy woman!’’ (Ó Cathain 1995: 42; Marshall 2003: 78). These rushes were then woven into shapes such as eyes, sun wheels and crosses by folding from left to right (a selection of which are shown above). These shapes were thought to offer protection from fire, lightening, infectious diseases, and the evil eye (Evans 1957: 268). It was believed that no evil could pass the charm when it was hung above doorways and local Fingallian accounts specify that the crosses were ‘’hung on the backs of doors and in some outside sheds. Some of the crosses [were] kept throughout the year’’ (SC Vol. 0788: 153-4; 0785: 155). 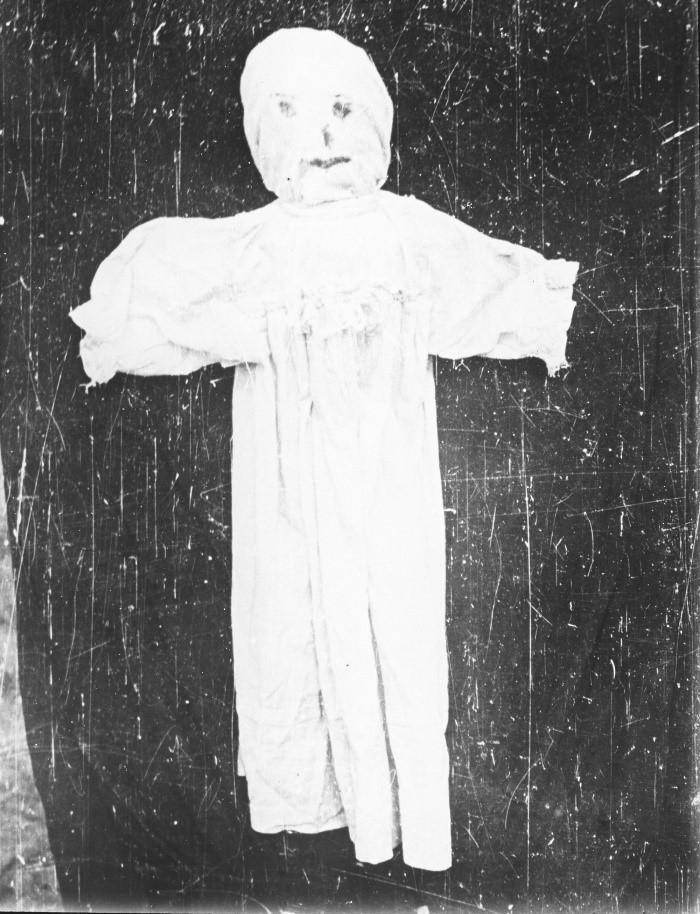 Another popular custom was to craft a doll called a Brideóg (pictured above) which was a model of Brigid made of straw or reeds. Sometimes the doll was made of a churn staff dressed in a white garment featuring a turnip for a head. However, it has also been recorded that the doll was made of the last sheaf of the previous harvest called the Cailleach (meaning hag) which had been kept inside over winter (http://dil.ie/7751; Ó Cathain 1995: 41-2; 146). In Scottish tradition Brigid’s role as the maiden of spring who takes over from the Cailleach or hag is emblematic of the transition from winter to spring. The fashioning of the last sheaf named the Cailleach into the Brideóg is suggestive that this belief was also part of Irish tradition. A less well-known custom was the making of Brigid’s girdle or belt. For this activity communities would come together to make the giant belt out of twisted straw rope which involved plaiting three lengths of straw together and binding the ends to make a continuous loop. The belt was then taken from household to household and if you passed through it three times you would receive a blessing (Marshall 2003: 78). The belief that Brigid herself walked the land on the eve of her festival was widespread and gave rise to two other curious customs. The first was that if you left a piece of cloth or ribbon overnight and Brigid touched it, it would be imbued with curative powers for the year ahead. The second is that a bed of rushes should be prepared beside the fire as a resting place for Brigid. On the festival day itself butter was freshly churned and a feast of colcannon, dumplings and boxty was had by all.

St. Brigid is one of the three most popular saints of Ireland, the other two being Patrick and Columcille. What we know of her life comes from two medieval texts: the On the Life of St. Brigit and the Bethu Brigte.  In both texts Brigid's mother is described as giving birth to her at sunrise holding a vessel of milk in her hand ‘’when she put one foot over the threshold of the house inside and the other foot outside, then did she bring forth the girl, to wit, Saint Brigit’’ (On the Life of St. Brigit: 57). These accounts go on to describe the many miracles performed by Brigid which include hanging her cloak on a sun beam and controlling the weather. The texts also specify that she only took milk from a special red eared cow while in folk tradition she was believed to walk the land on the eve of her festival accompanied by a white cow who is sometimes named as the Glas Goibheann (Ó Cathain 1995: 143). Some scholars interpret these accounts as the representation of a real woman whose life story attracted elements of preexisting myths and legends in the retelling. However, other scholars question the historicity of these accounts instead seeing her connections to cattle, dairy and the sun as pre-Christian motifs hinting at pagan origins for Brigid (Green 1997: 198; Ó Cathain 1995: 121). This interpretation is strengthened by the other name for St. Brigid’s day which is Imbolg a pre-Christian festival which celebrated the lactation of ewes (Marshall 2003: 76; Green 1997: 198). The name Imbolg connected with new life and new growth reflects a similar focus on the transition from winter to spring. Both Imbolg and St. Brigid’s day celebrate the reawakening of nature with the customs of the festivals designed to welcome the seasonal transition and Brigid herself into the domestic sphere. So, if you feel like welcoming spring this year why not try making a St. Brigid’s cross?

If you would like to read the medieval accounts of Brigid’s life you can access them through Celt.ie here and here. For a contemporary discussion of the figure of Brigid you can listen to the Story Archaeology podcast The Search for Brigid or the Blúiríní Béaloidis episode Brigid in Folk Tradition. Or if you’re feeling crafty you could check out the National Museum’s resources on how to make a Brigid’s Cross here.

All images are curtesy of the National Folklore Collection.

On the Life of St. Brigit, Trans: Stokes, Whitley, accessed through https://celt.ucc.ie/published/T201010/index.html