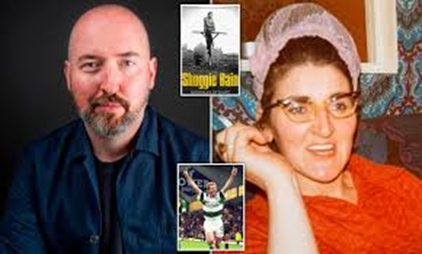 This debut novel by Scottish author Stuart Douglas won the 2020 Booker award. The award ceremony was televised on UK national news with each of the shortlisted authors video linked on screen. The author has stated that the book is not autobiographical but is rooted in his own experience, growing up with a single parent in Glasgow.

The book is set in an impoverished 1980’s Glasgow. Industry is declining due to factory and mine closures. “Industrial days were over, and the bones of the Clyde Shipworks and the Springburn Railworks lay about the city like rotted dinosaurs”.  There is unemployment and social deprivation. This, against a backdrop of addiction and abuse moves the story back and forwards from 1992 to 1981. We are introduced to the feisty Agnes Bain (Shuggie’s mother) the main character of the book.  “She wanted to feel a little envy from strangers, to dance with men who held her proud and close. Mostly she wanted to take a good drink, to live a little”.  Remarried to Shug Bain “Smiling to himself, he thought how smashing he looked: white shirt, black suit, black tie”, with two children from a previous marriage, Catherine, and Alexander (Leek) “If Agnes would take a drink on a Thursday, then Leek would take some tins of beans and powdered custard from his granny’s kitchen and come here to hide”.

Agnes has a third child called Shuggie (Hugh), named after his father. The family move from sharing a council high rise flat with Wullie and Lizzie (Agnes’s parents) to their own house outside the city - a miner’s house on the site of a closed pit. “They were the plainest, unhappiest-looking homes Agnes had ever seen”.  Shuggie growing up is different from the other children.  He pulls away from the tough masculine roles that are displayed in front of him. His doll is his best toy “Shuggie knelt down and pushed Daphne’s blond hair into the iridescent puddle. When he took her out, the shiny yellow hair had turned the colour of night, and he tutted”. Leek advises him to walk differently. “Try not to be too swishy. It only puts a target on your back”.

Shuggie often fends for himself, with his mother not available to him while drinking. “Her body hung off the side of the bed, and by the odd angle Shuggie could tell the drink had spun her all night like a Catherine wheel”.  His disinterested father is often missing working the night shift as a taxi man.  “He liked to roam alone in the darkness, getting a good look at the underbelly” and has an interest in other women. He abandons the family eventually. “She had loved him, and he needed to break her completely to leave her for good. Agnes Bain was too rare a thing to let someone else love”.

There is little support in the Bain household, the siblings are left to make it on their own. Their income depends on state benefits and when the money runs out, they often resort to raiding the gas meter or tv meter for coins. Catherine comes to a decision in her late teens that will improve her life.  “Catherine picked the raw skin around her thumb and worried again that she was doing the wrong thing”.

The family struggle to live with an addict in the home, but there is love in this household. Agnes loves her children despite her desperation and lapses.

“Mmmm, you smell like fresh air” she said, cupping his cold cheeks and kissing them gently. The interchangeable roles between Agnes and Shuggie are evident, and he does his best to protect her.  “These sunken-faced pit aunties appeared at the door most mornings like feral cats…if Shuggie was home from school, he wouldn’t let the women in”.

Agnes tries to give up the drink.  “Agnes stepped out of her own ashes in time for Shuggie’s tenth birthday…She had spread Christmas over four different catalogues, piling the tree with presents and filling the table with four kinds of game and meat with no way of paying for any of it”.  She starts working at a local petrol station shop at night.  “The job helped with the loneliness.  It kept her busy, gave her something to do on the long, empty nights”.  She meets Eugene one evening on the job and starts a new relationship.

Life improves for a while and with sobriety Agnes resumes stability and recovers somewhat. Shuggie asks Eugene on the anniversary of Agnes’ first dry year.  “Do you plan on staying long....Mister McNamara.  I won’t like you if you disappoint her”.  Eugene is unnerved. “Agnes knew lying when she saw it…She watched the door close behind him, then the jiggle of the handle as he took care to make sure it caught in its lock, like he was sealing a box”. With her AA support group celebrating this occasion, Agnes.... “felt ill suddenly, felt like she wanted them out of her house, to give her life a good bleaching”.  She looks into her bathroom mirror, “Was she broken and stuck like them? In the mirror a facsimile of Elizabeth Taylor looked back at her, only now it was Liz, the vain and haughty version from the paparazzi photos on the yacht in Puerto Vallarta”.

The addiction continues and Agnes leaves Shuggie alone one New Year’s Eve and travels to Glasgow to a house party. Shuggie “pried open the gas meter the way Jinty had shown them”.  He has enough for a one-way taxi fare into the city.  “The tenement close was poorly lit. Somewhere above Shuggie loud music and happy voices bounced off the walls. When Shuggie finds his mother,  “Agnes’s hair was flat and matted on the right side. In the dim light the boy could see by the smallness of her eyes that she was no longer drunk. As she looked at him her lip trembled as if she would cry. This scared him into stopping his own sobbing, and he tried to stand up straight like a big boy”.

He tries to live a normal life but “It always ended up the same: she returned the messages that she could and bought what she really needed first, drink. So now when he cashed the benefit books, he just put his head down and got on with it with a sense of resignation”.

Eventually Agnes and Shuggie, now a teenager, swap the miner’s house for a flat in the city, to move on and make a fresh start.  “After the isolation of the slag hills, the tenements felt like a thriving hub of life”.  Shuggie hopes that Agnes can finally put alcohol behind her, but his love for his mother and his naivety blind him to reality of life with an addict.

Whether he can save his mother or not, becomes more of a question about saving himself. The book, although very hard hitting in its graphic depictions of poverty and violence, never reduces the main characters to cardboard villains. The frailty of their humanity comes through, despite their inconsistencies and weaknesses.