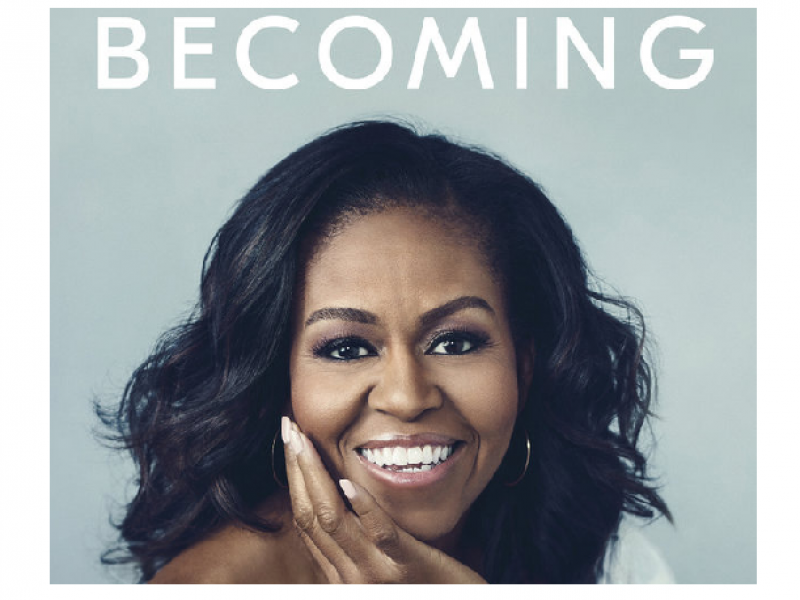 This is one of my favourite excerpts from Michelle Obama's book Becoming.  It is so vividly written that my imagination was having a ball picturing the First Family running, the Usain Bolt type of running, across the South Lawn.  If you've read it, you'll probably agree with me and with over a million people worldwide who have read it as well that it is a brilliant read.

"One spring morning, Barack and the girls and I were summoned downstairs from the residence to the South lawn.  A man I'd never seen before stood waiting for us in the driveway.  He had a friendly face and a salt-and-pepper mustache that gave him an air of dignity.  He introduced himself as Lloyd.

"Mr. President, Mrs. Obama," he said.  "We thought you and the girls might like a little change of pace, and so we've arranged a petting zoo for you."  He smiled broadly at us.  "Never before has a First Family participated in something like this."

The man gestured to his left and we looked.  About thirty yards away, lounging in the shade of the cedar trees, were four big, beautiful cats.  There was a lion, a tiger, a sleek black panther, and a slender, spotted cheetah.  From where I stood, I could see no fences or chains.  There seemed to be nothing penning them in.  It all felt odd to me.  Most certainly a change of pace.

"Thank you.  This is so thoughtful," I said, hoping I sounded gracious.  "Am I right - Lloyd, is it? - that there's no fence or anything?  Isn't that a little dangerous for kids?"

"Well, yes, of course, we thought about that," Lloyd said.  "We figured your family would enjoy the animals more if they were roaming free, like they would in the wild.  So, we've sedated them for your safety.  They're no harm to you."  He gave a reassuring wave.  "Go ahead, get closer.  Enjoy!"

Barack and I took Malia's and Sasha's hands and made our way across the still-dewy grass of the South Lawn.  The animals were larger than I expected, languid and sinewy, their tails flicking as they monitored our approach.  I'd never seen anything like it, four cats in a companionable line.  The lion stirred slightly as we drew closer.  I saw the panther's eyes tracking us, the tiger's ears flattening just a little.  Then, without warning, the cheetah shot out from the shade with blinding speed, rocketing right at us.

I panicked, grabbing Sasha by the arm, sprinting with her back up the lawn toward the house, trusting that Barack and Malia were doing the same.  Judging from the noise, I could tell that all the animals had leaped to their feet and were now coming after us.

“I thought you said they were sedated!” I yelled.

“Don't worry, ma'am,” he called back.  “We've got a contingency plan for exactly this scenario!”  He stepped to one side as Secret Service agents swarmed past him through the door, carrying what looked to be guns loaded with tranquilizer darts.  Just then, I felt Sasha slip out of my grasp.

“This is your plan?” I screamed. “Are you kidding me?”

Just then, the cheetah let out a snarl and launched itself at Sasha, its claws extended, its body seeming to fly.  An agent took a shot, missing the animal though scaring it enough that it veered off course and retreated back down the hill.  I was relieved for a split second, but then I saw it – a white-and-orange tranquilizer dart lodged in Sasha's right arm.

I lurched upward in bed, heart hammering, my body soaked in sweat, only to find my husband curled in comfortable sleep beside me.  I'd had a very bad dream."

Michelle Obama's, Becoming is still in high demand by our borrowers.  At a point, it had over 800 reservations on the catalogue.  It is available in multicopies on the catalogue.  If you want to reserve a copy, this can be done in one of the Fingal Library branches, or go online; www.fingal.ie.  Also available as eBook / eAudiobook on BorrowBox.