The Commemoration of The Burning of the Coast Guard Buildings 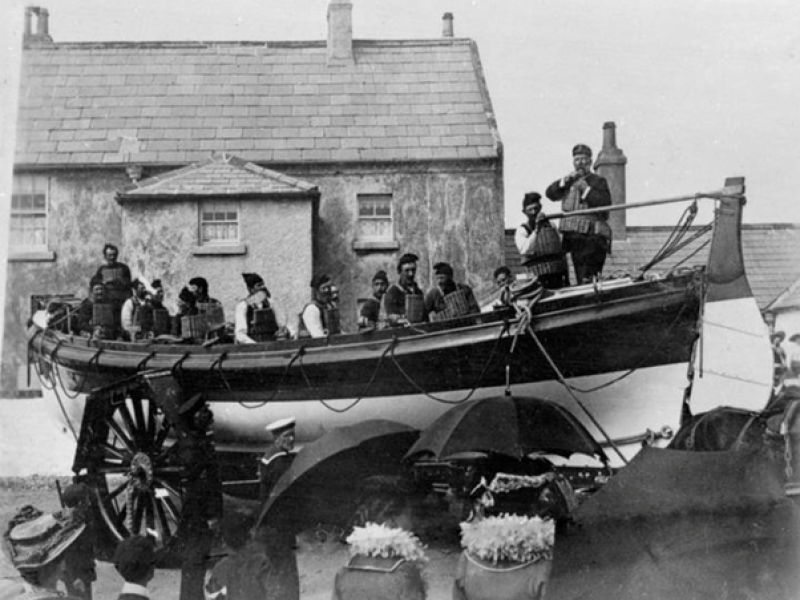 In June 1921 a consignment of Thompson sub-machine guns was expected to arrive, from America, to the small fishing village of Loughshinny, North of Skerries. The consignment was bound for the Irish Republican Army.

Loughshinny harbour and the surrounding Fingal Coastline was, at that time, defended by the Coastguard and there were a number of coastguard buildings which were occupied and manned by ex-British naval officers and their families. The buildings were strategically placed for signalling purposes and as well as being easily viewed by each other they were also connected by telephone. The Irish republican army knew that if the consignment was to be successfully received it was imperative that each building was decommissioned at the exact same time to prevent any communication between them.

The operation was planned at a Brigade council meeting and it was decided that the Coast Guard buildings at Loughshinny, Skerries (Harbour), Rush & Rogerstown would be burnt to the ground decommissioning the service and all communication between them. In the early hours of 18th June 1921, the column which was divided into teams of 2 or 3 members and local volunteers who provided the column with “paraffin supplies and other materials such as bars to smash doors, ceilings, etc” (Michael Rock- eyewitness report)  set about the task of burning down the Coastguard Buildings. There were no fatalities during the operation as the buildings were vacated before they were set a light.

On the 21st of June 2021, Fingal County Council commemorated this local historic event by launching a Fingal Libraries exhibition entitled The Burning of the Coastguard Buildings which is displayed in Skerries Church, Rush Library and the Atrium, County Hall Swords. The Council’s Arts Department also launched a unique bespoke writing commission entitled “a Burning Tide” in partnership with the Irish Writers Centre, in which six renowned authors will, in their own unique style, produce six modern writing pieces which will represent their interpretation of the events that transpired on the night of the 18th June 1921.

Further details on the writing commission will be published on this website shortly. …

Burning of the Coastguard Stations Exhibition

Archivist Karen de Lacey and Senior Librarian Catherine Keane from Fingal Local Studies & Archives have produced an exhibition which looks at the history and functions of the Coast Guard in Ireland, their locations in Fingal, arms smuggling by the IRA at this time, the plan to smuggle 1,000 ‘tommy guns’ to Ireland via Loughshinny Harbour and the events of the 18th June 1921 when the Coast Guard stations were attacked.

As part of Fingal County Council's Commemorations programme 2018-2023, the Arts & Libraries Department have produced two separate distinctive elements to commemorate the Burning of the Coast Guard Buildings in June 1921.  The Libraries Exhibition and the Fingal Arts new writing commission on the theme were launched today by Mayor of Fingal Cllr. Seána Ó Rodaigh