Fingal County Council has granted Part 8 planning permission for the Harry Reynolds Road Pedestrian and Cycle Route in Balbriggan which will provide safe, segregated cycling and pedestrian routes for residents and schoolchildren. 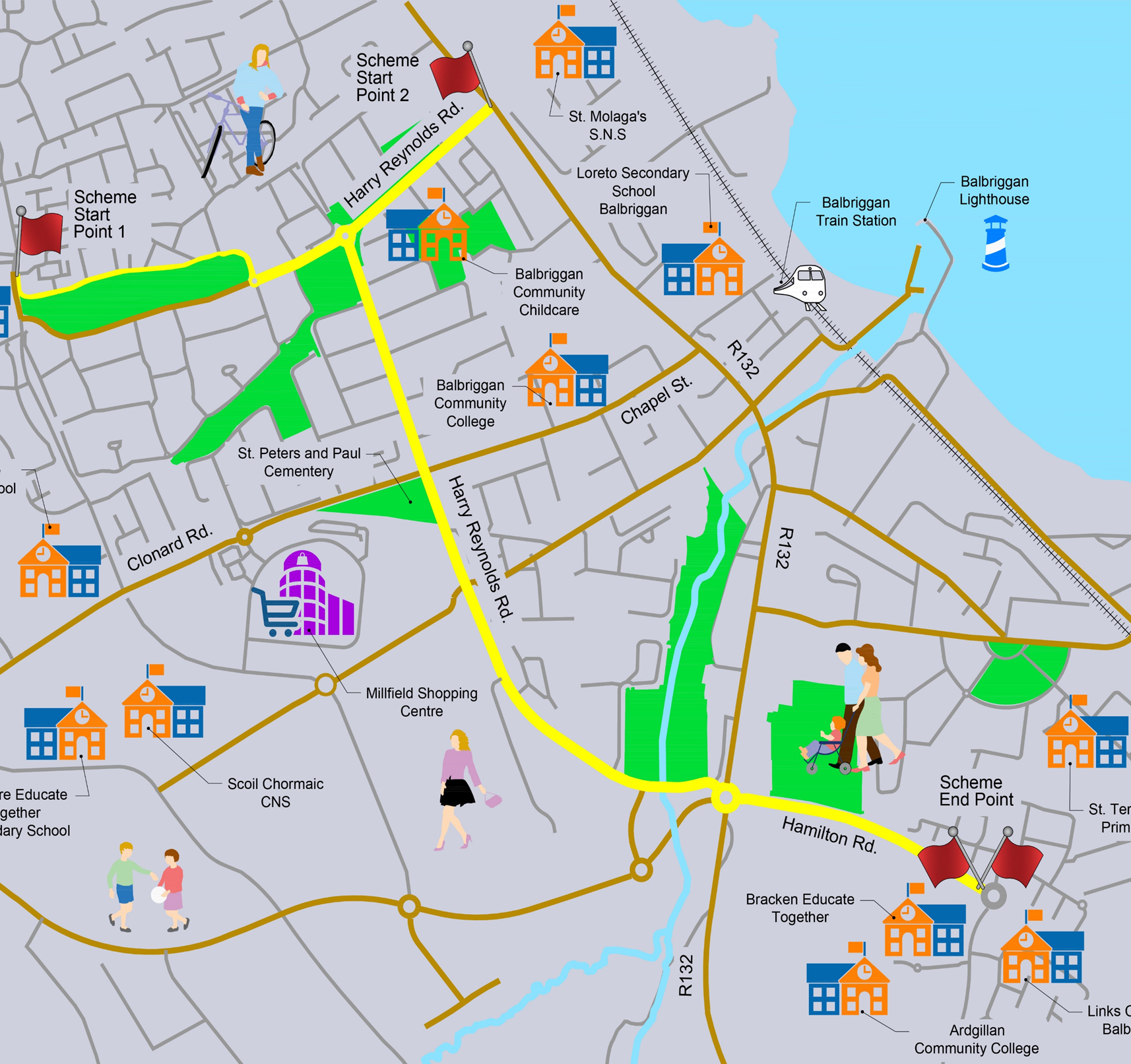 Costing an estimated €8.5m, the 3km route will be funded by the National Transport Authority as part of Greater Dublin Area Cycle Network Plan and is an important element of the developing sustainable and active travel network in the town.

Linking a number of local schools and amenities and serving a large part of the local population, the NTA-funded scheme will also provide for a future link to the proposed Fingal Coastal Way greenway, for which route options public consultation will commence in the coming weeks also.

The scheme was one of the priority actions “20 things in the first 12 months” committed to by Fingal County Council as part of the “Our Balbriggan 2019-2025 Rejuvenation Plan”.

The proposed scheme includes a number of key measures to improve pedestrian and cyclist facilities in the area, including;

A number of submissions received during the planning process expressed concerns regarding the scheme’s impact on trees. The approved design has been amended to retain more of the existing trees while also including significant new planting of trees at various locations along the route corridor.

Following motions from local councillors at Monday’s meeting, a commitment was also given by Fingal County Council to work with the local community to provide a piece of public art as part of the scheme.

The scheme will be procured in early 2021 with a view to starting construction later in the year, with a construction duration of approximately 18 months.

Mayor of Fingal Cllr David Healy said: “I welcome the Council approval for the Harry Reynolds Road Pedestrian and Cycle Route scheme. It is part of a County-wide commitment to active travel which is central both to reducing greenhouse gas emissions and protecting public health."

Chief Executive of Fingal County Council AnnMarie Farrelly said: “As well as being  an important step towards providing communities with a sustainable transport options, this development demonstrates Fingal County Council’s ongoing commitment to Our Balbriggan. We are grateful to our partners, the National Transport Authority, for their ongoing support in delivering this scheme, and for the support of the local community and local councillors through the consultation process.”

Michael Aherne Head of Transport Development in the National Transport Authority said: “The NTA are delighted to invest in this 3km project, which will allow people in  Balbriggan to walk or cycle to local employment, parks and particularly a number of schools safely and conveniently. Balbriggan has such a young and growing population, high quality infrastructure like this is necessary to allow the town to develop successfully and sustainably."