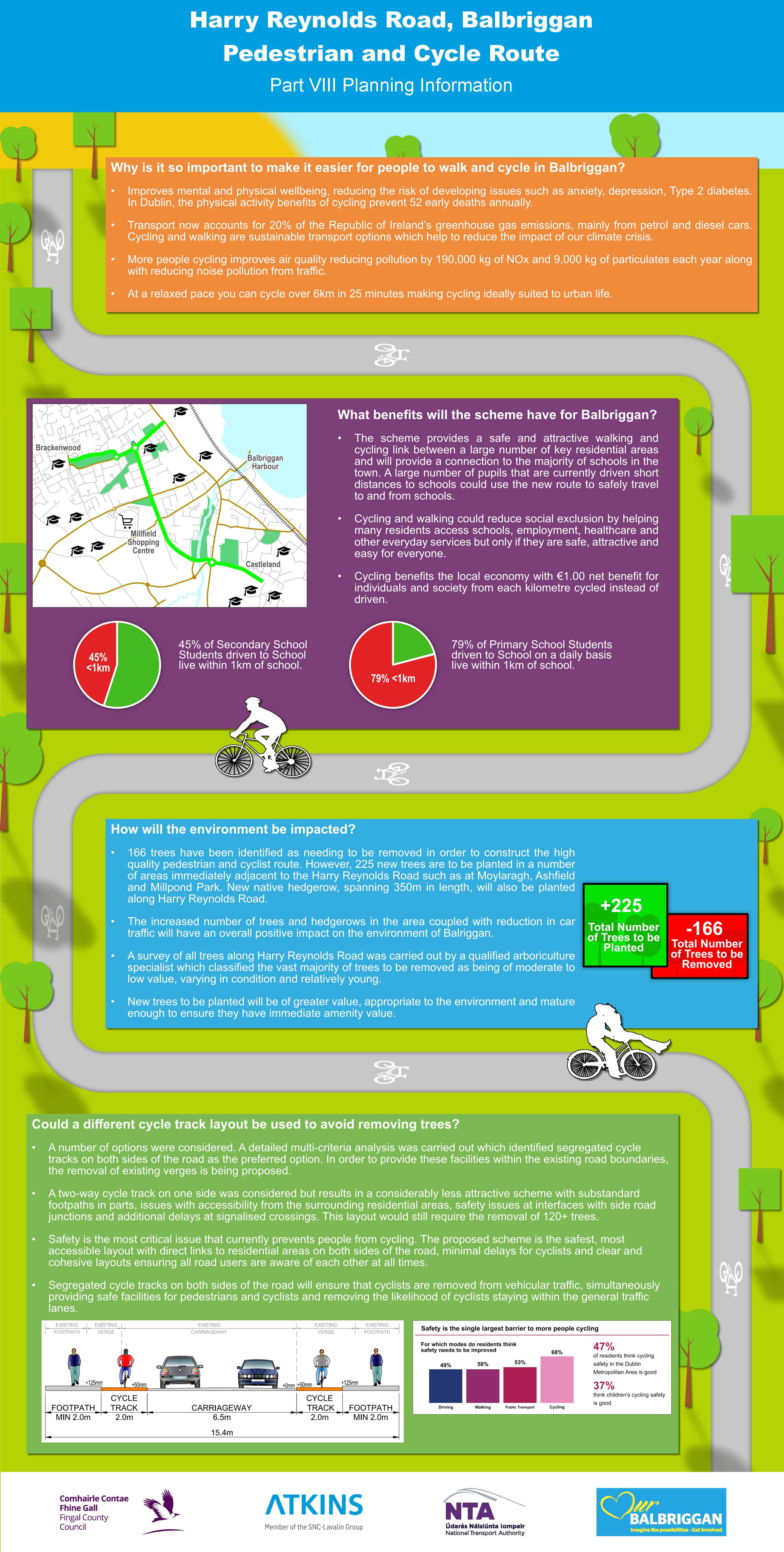 The purpose of the information note below is to provide a summary of the details of the proposed tree removal included in the planning documentation for the Proposed Harry Reynolds Road Pedestrian and Cycle Route. The proposed scheme is currently in the public consultation phase of the planning process, pursuant to the requirements of Part 8 Of the Planning and Development Regulations 2001 (As Amended).

Information Note on the Part VIII

The route forms part of the Greater Dublin Area Cycle Network Plan and will be an important element of sustainable infrastructure within the town of Balbriggan.

Linking several schools and local amenities and serving a large part of the local population, the National Transport Authority-funded scheme would also provide for a future link to the proposed Fingal Coastal Way.

Mayor of Fingal Cllr David Healy said: “I welcome the start of the application process for the Harry Reynolds Road Pedestrian and Cycle Route scheme.

“It is fitting to have a cycling scheme on the road named in honour of the first Irish person to win a world cycling championship, the ‘Balbriggan Flyer’.

“As a Council, we are committed to bringing our streets and roads in Fingal up to standard with safe designs for people walking and cycling. This design is part of that work.

"We are making these changes to our roads and streets in consultation with the local and wider community. In particular we are committed to listening to groups representing people who walk and cycle, and disabled road and street users, and to learning from good design practice in Ireland and abroad.

"I urge all in the community to engage with the proposal which is opening to public consultation this week and to give your feedback on the design.”

Chief Executive of Fingal County Council AnnMarie Farrelly said: “The scheme is an important part of Fingal’s drive to make pedestrian and cycling options more accessible to all, and to make our infrastructure more connected as we do so.

“I look forward to the progress of the initiative and acknowledge the funding contribution of the National Transport Authority to the scheme.”

Director of Planning & Strategic Infrastructure in Fingal County Council Matthew McAleese said: “The proposed scheme has the potential to be a great asset to Balbriggan and to Fingal.

“The scheme is consistent with the Fingal Development Plan 2017-2023 in ensuring a safe and convenient road, pedestrian and cycle system promoting permeability, accessibility and connectivity between existing and new developments within Balbriggan.”

Head of Transport Development in the National Transport Authority Michael Aherne said :“The NTA are delighted to invest in this 3.1km project, which will allow people in Balbriggan to walk or cycle to local employment, parks and particularly numerous schools safely and conveniently.

“Balbriggan has such a young and growing population, high quality infrastructure like this is necessary to allow the town to develop successfully and sustainably.”

Plans and particulars of the proposed development will be available for inspection at http://consult.fingal.ie/en/browse and inspection or purchase at a fee not exceeding the reasonable cost of making a copy from Tuesday 7th July 2020 to Wednesday 5th August 2020 at the following location: Fingal County Council, County Hall, Main Street, Swords, Co. Dublin, K67 X8Y2, during normal opening hours (Monday to Thursday 9am to 5pm and Friday 9am to 4.30pm).

Submissions or observations with respect to the proposed development dealing with the proper planning and sustainable development of the area in which the development would be situated, may be made either online through the website https://consult.fingal.ie/en/browse or in writing to Senior Executive Officer, Planning & Strategic Infrastructure Department, Fingal County Council, County Hall, Swords, Co Dublin K67 X8Y2.

Submissions or observations with respect to the proposed development must arrive no later than 5pm on Wednesday 19th August 2020.