The women of Fingal have been captured in tapestry! As part of the Creative Ireland Programme Fingal County Council is delighted to launch the Women of Fingal Tapestry.

The women of Fingal have been captured in tapestry! As part of the Creative Ireland Programme Fingal County Council is delighted to launch the Women of Fingal Tapestry.  The Tapestry, created by artist Agnieszka ‘Uisce’ Jakubczyk captures aspects of Fingal's women throughout the ages from finds uncovered on the Drumanagh excavations to revolutionary women and was launched in Rush Library by Mayor of Fingal Cllr Seána Ó Rodaigh.  The launch on Wednesday in the beautiful library setting was a very moving occasion for those in attendance.

This beautiful work was created to honour the experiences of women, that have so often gone unnoticed and unrecorded through time and to celebrate a memory and a legacy which the women from the Fingal area have been continually passing on through centuries, from prehistoric times to the present day. The project was funded by Creative Ireland and overseen by Christine Baker, Fingal County Council Heritage Officer.

Speaking at the launch Mayor of Fingal Cllr Seána Ó Rodaigh said 'Uisce, with her own hands and artistry has woven women back into our history in this tapestry'

Christine Baker Fingal Heritage Officer said ' It is amazing to see heritage, art, archaeology and creativity combined in beautiful motifs, images that tell the story of the women of Fingal'.

Agnieszka ‘Uisce’ Jakubczyk, artist praised the contribution of women to society and their values of knowledge, care, compassion, love and building and keeping communities together and continued:

“I have chosen weaving as the main technique for the piece because weaving was considered a feminine craft in Ireland through centuries. For constructing the piece I have selected fibres which would be in women’s hands in various times in the history of Ireland: linen, wool, hemp, nettle and goat fibres.

Most motifs featured in the Tapestry are found in the Fingal area, e.g. three weaving tools: a needle, a weaving comb and a loom weight, found during the Drumanagh archaeological digs in 2019. Others are linked to particular women associated with the area e.g. a motif of Molly Weston riding a white horse to the Battle of Tara in 1798. There are also several motifs in the Tapestry of more universal feminine character.

I wanted to create an art piece that every single woman, from Fingal or elsewhere, could relate to in her own way.”

Following a period on display in Rush Library the Women of Fingal Tapestry will now be moving to the beautiful setting of Swords Castle where it will be on display shortly. 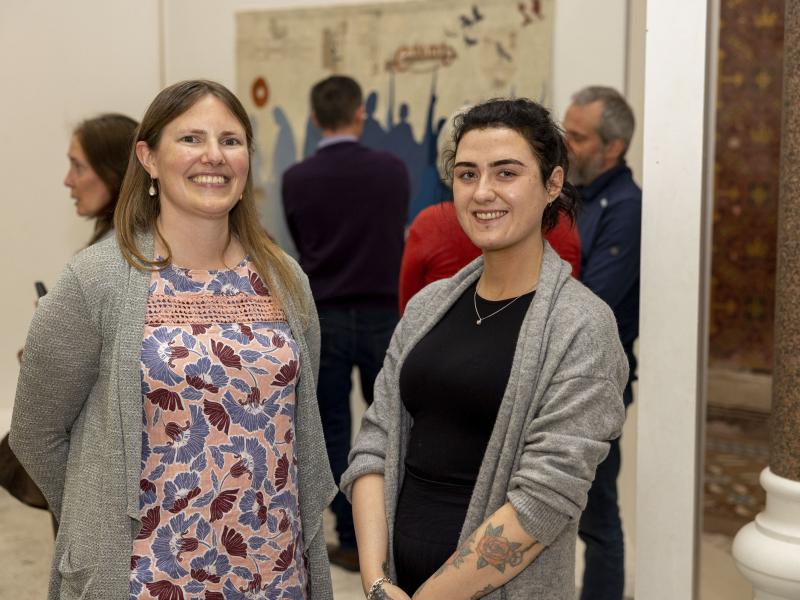