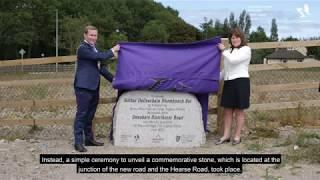 The Road has been opened to traffic since March 6 but, because of the COVID-19 pandemic, the planned official opening could not take place. Instead, the unveiling of a commemorative stone, located at the junction of the new road and Hearse Road, was held.

Mayor O’Brien said: “It’s an honour to formally open the Donabate Distributor Road. It is a major piece of infrastructure for the Donabate Portrane area which will alleviate a lot of issues with traffic within the village centre as well as opening up land for development on the peninsula. I would like to pay tribute to the elected members, past and present, from the area who supported this important project and worked with the staff of the Council to make it happen.”

The Chief Executive of Fingal County Council, AnnMarie Farrelly, said: “I am really pleased to see the opening of the Donabate Distributor Road as it gives Donabate and the peninsula a new route into the peninsula so alleviating all that traffic that been causing a problem in recent times. It also will allow us to open up some housing land which will see new and much needed homes delivered in the Fingal and Donabate area and I expect to see major progress on that in the coming months.”

Fingal County Council’s Director of Planning and Strategic Infrastructure, Matthew McAleese, said: “The road is critical to open up the lands for new housing, three schools and a recreational and education hub. We are currently preparing an Urban Framework Plan for Donabate to increase pedestrianisation and identify opportunity sites which will have a very positive effect on the village centre itself.”

The 4km Donabate Distributor Road runs in an easterly direction from the R126 Hearse Road on the south-west of Donabate village, across the Dublin-Belfast railway line, before heading in a northerly direction to reconnect with the R126 on Portrane Road. 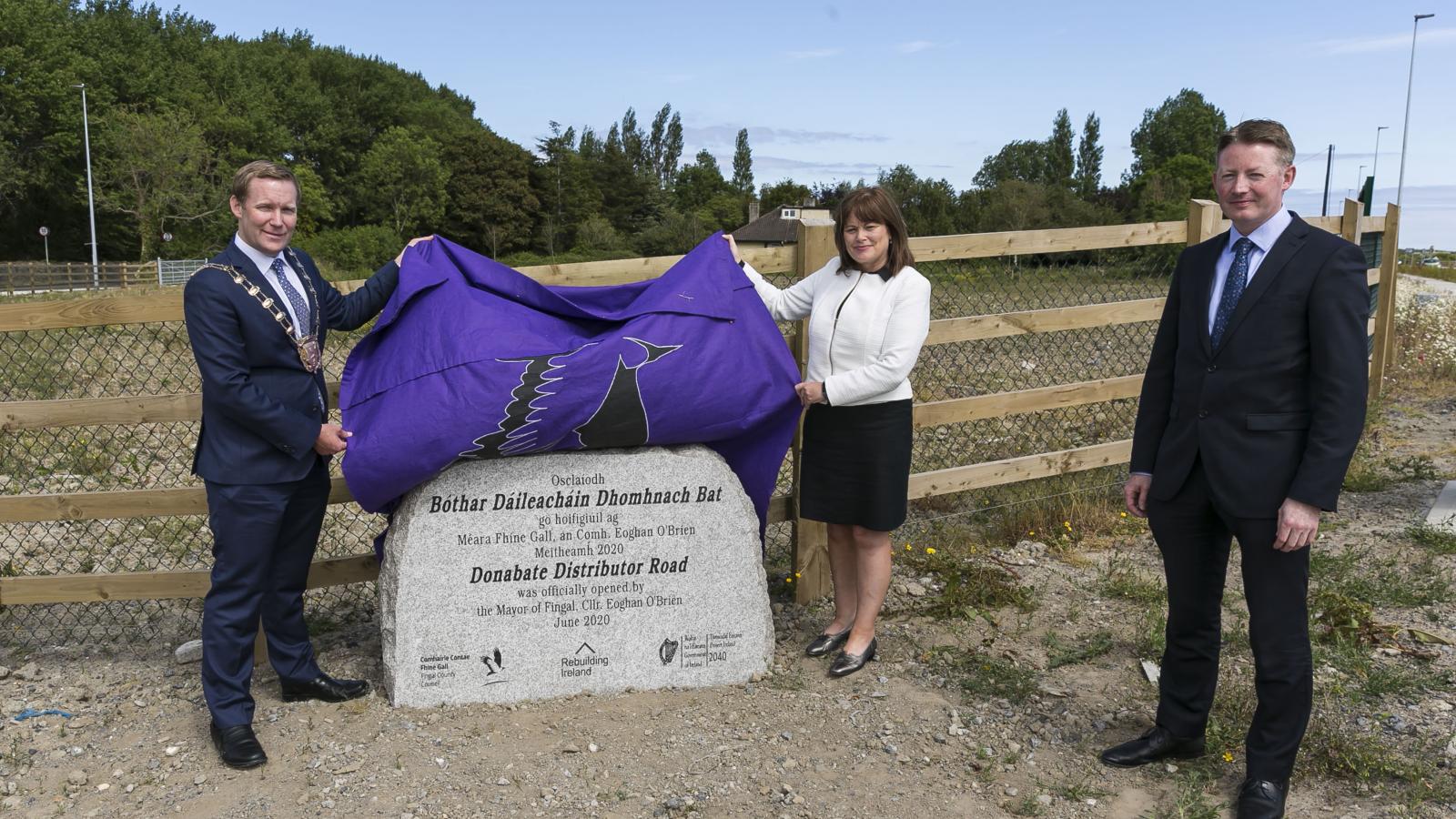 The building of the bridge over the railway line was a major engineering project according to Fingal County Council Senior Engineer Paul Carroll.

“The Railway crossing was built over a number of nights to avoid disruption to the mainline rail services. A number of large concrete beams were lifted into place when railway possession was taken from midnight to 6am. It was constructed by our contractor MEIC Limited and supervised by Fingal County Council and RPS Consulting Engineers. The bridge provides a second route on the peninsula over the railway line and we recently received planning permission for a third bridge, located within Donabate village, which will be for pedestrians and cyclists and on which design work is well advanced.”

The new road will provide an alternative access for Portrane and the eastern parts of Donabate and will also improve access to the strategically important National Forensic Mental Hospital in Portrane when this national facility becomes operational.

Footpaths and off-road cycle facilities are included along the length of the road which has been initially constructed as a single carriageway, as that is considered sufficient to cater for traffic in the immediate future. However, planning permission was granted for a dual carriageway and it is expected that the second carriageway will be added in the coming years when traffic levels are forecast to increase as a result of the adjacent lands becoming fully developed.

The main contractors were MEIC Ltd and, at its peak, some 100 personnel were employed on site between the main contractor and various sub-contractors, with additional employment generated from off-site suppliers and services across the supply chain.

The estimated cost of this LIHAF project was €14.15m with €10.61m (75%) being funded by the Department of Housing, Planning and Local Government with the remainder funded by Fingal County Council.

The Donabate Distributor Road is part of the Donabate Local Area Plan 2016-2022 which is designed to deliver social and physical infrastructure to the area in order to create sustainable communities. As well as a phased delivery of a wide range of house types and sizes, there are also plans for the development of a local centre and recreational facilities including the Donabate Recreation Hub, the Broadmeadow Greenway and the Corballis Nature Park.

A video of the official opening can be viewed at YouTube link https://youtu.be/5U1nXEsV4uQ