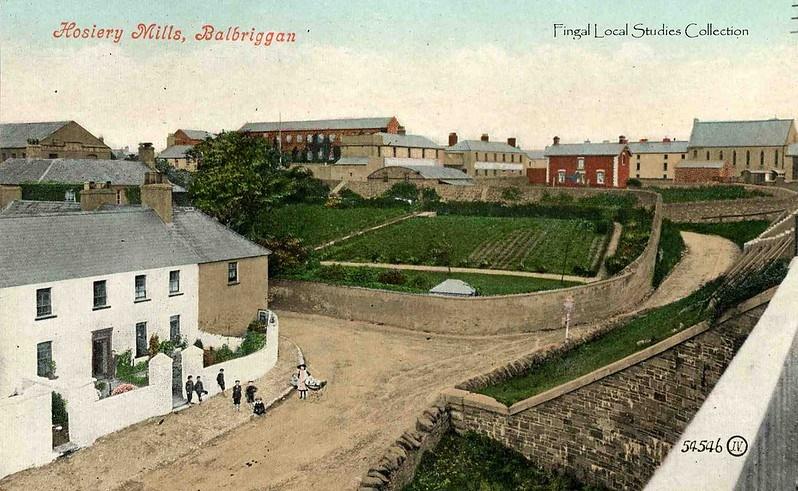 In March 2020 An Post gave every household free postcards for posting to family and friends across the country to help them stay connected during lockdown. With social media etc. sending postcards had gone out of fashion. Postcards can be traced back to the mid-19th century and is linked to the development of pre-paid postage or stamps. By the 1870s picture postcards were all the rage and Deltiology, the official name for postcard collecting, was a hobby.  History itself can be tracked on postcards, from historical buildings, famous people, art, holidays and more. A collection of historical postcards pertaining to Fingal have been acquired over the years by Fingal Local Studies. A number can be viewed here https://www.flickr.com/photos/fingallocalstudies/sets/72157631189522736/?fbclid=IwAR1HO_Vu_KHhqMGwZcau2k_oLMWK2oHy2rlfNiP0EKdVufw-yoi6PyHOR6c

This is a postcard of Smyth’s Hoisery Mills, Balbriggan. In 1780 a Joseph Smyth joined his cousin Mr Hatton in establishing the firm of Smyth & Co. in Balbriggan where it traded for over 200 years. One of its employees was Thomas Managan, who along with his brother was the first to perfect lace stockings. Their customers included the Empress of Austria, the Czarina of Russia and Queen Victoria of Britain.  Managan won the royal approval by making stocking which were so fine as to weigh just three and a half ounces for a dozen pairs. He continued to make stockings for Queen Victoria in Balbriggan for almost sixty-five years. In 1898, the Queen instructed that an autographed photograph of herself be presented to Thomas Mangan in recognition for the period he was engaged in the manufacture of hosiery for the Queen and Royal Family.