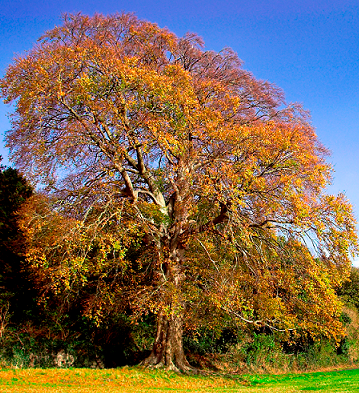 Contrary to popular belief most of Ireland’s natural forests were cleared before 1600, much of this clearance in prehistoric times. In medieval times there were scattered woods and copses throughout Fingal but forest cover reached a critical low in the 17th century. Much of present day Blanchardstown was covered in woodland known as the Great Scaldwood. There was an organised wolf cull in the Great Scaldwood in 1652. Highwaymen and robbers added to the dangers of the area. The Red Lyon, near Dubber was a hostelry where travellers who ‘feared to risk the perils of the notorious woods after nightfall’ could stop. As a consequence of the continuing loss, the 18th and 19th centuries became a time of fashionable tree planting in demesnes, a practice encouraged by the Royal Dublin Society from 1740 onwards as can be seen in Newbridge and Malahide Castle demesnes.  Some placenames indicate woodlands of the past such as Clonsilla (meadow of willow), Sillogie (place of the willow) and Rush (wood) while occasionally some folkore survives. Near Turvey there is tree which never blossoms it is said that a man named Daw a murderer, was hanged on it. At the back of a house near-by, it is said red grass grows where he is supposed to have wiped the blood off the knife. Carney’s Tree on the road from Balcunnin to Balrothery was surrounded by an embankment. It was an old custom when funerals were passing by to carry the corpse around the tree three times and resting it on the embankment for a few moments before resuming the journey to the place of interment. Unfortunately Carney’s tree became diseased and was replaced in the 1990s. The Schools’ Collection is available on www.duchas.ie