Fingal County Council’s Affordable Housing Scheme at Dun Emer in Lusk took a major step forward today when the first sod was turned on the construction site by the Mayor of Fingal, Cllr David Healy; the Deputy Mayor of Fingal, Cllr Robert O’Donoghue; and the Minister for Housing, Local Government and Heritage, Darragh O’Brien, TD.

Construction on 39 affordable homes and 12 social homes will commence in a couple of weeks once site works are completed and applications for the Dun Emer Affordable Home Purchase Scheme are being accepted through an online portal up until 5pm on May 31.

The Application Portal opened on May 4 and there has been a steady stream of applications for the affordable homes. The allocation process will be based on the Scheme of Priority with each application being processed on the basis of its eligibility. 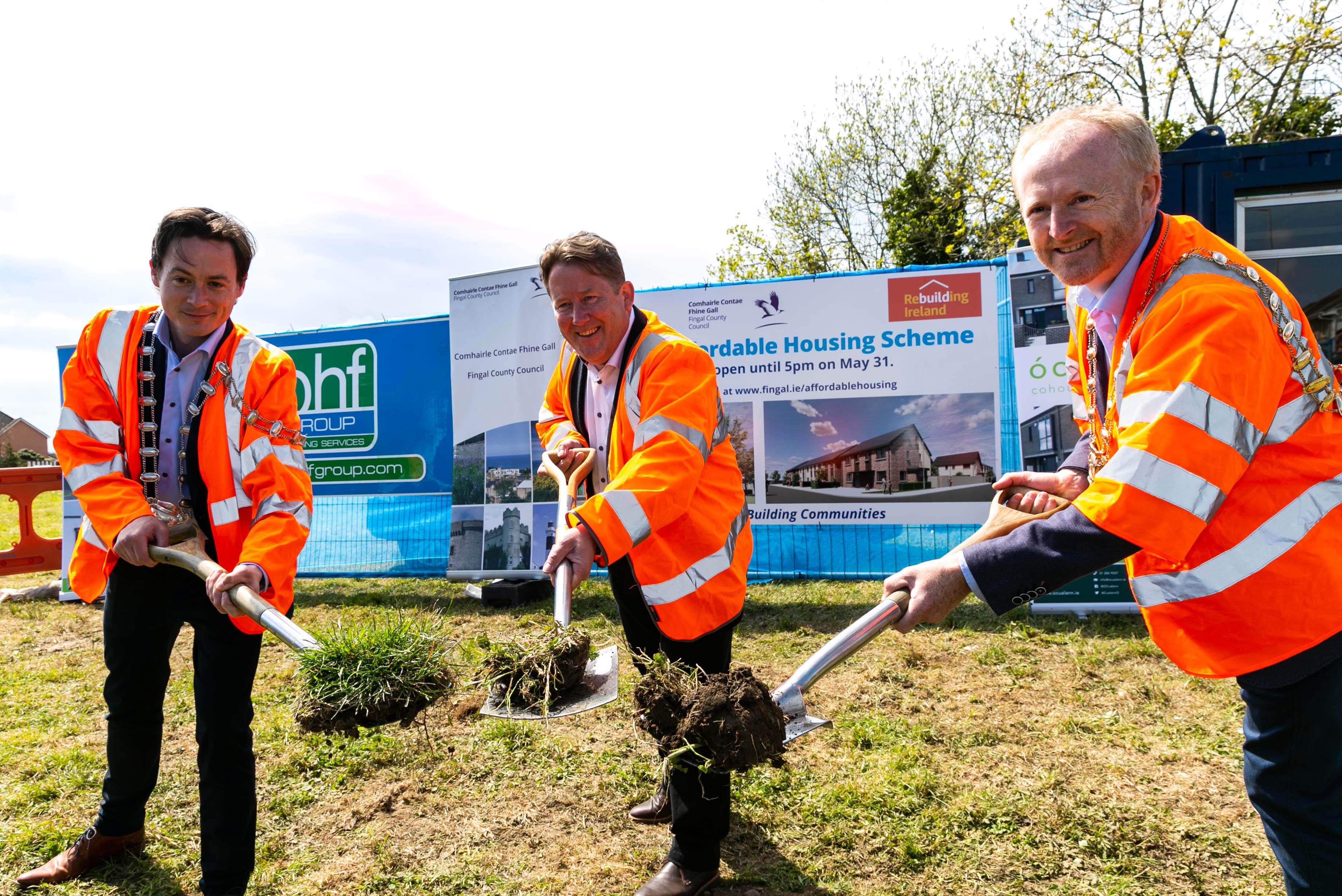 The Mayor of Fingal, Cllr David Healy, said: “Affordable housing is an important element in Fingal’s efforts to tackle the housing crisis and ensure that the housing needs of our communities are met. The application figures show clearly there is a demand for affordable housing.”

Minister Darragh O’Brien said: “I really want to commend Fingal County Council on bringing this project, which will be the first affordable purchase housing scheme in the county in 11 years, to fruition. They are also continuing in their plans to develop more affordable housing across North County Dublin with the support of my Department.

“The Serviced Sites Fund is just one of a number of affordability measures provided by my Department to make homes more affordable. We are simultaneously progressing the Affordable Housing Bill and the Land Development Agency Bill both of which will result in more affordable homes. Schemes such as this one here in Dun Emer are exactly what we want to see replicated across the country, delivering a mix of homes, built to very high standard, at affordable prices,” added Minister O’Brien.

The Deputy Mayor of Fingal, Cllr Robert O’Donoghue, who is also Chair of the Housing Strategic Policy Committee, said: “The scheme contributes to Fingal County Council’s aim to create and sustain communities with a healthy mix of tenure and housing types gives people a realistic opportunity to own their own home.”

The Chief Executive of Fingal County Council, AnnMarie Farrelly, said: “Dun Emer is the first of several social and affordable housing projects we are working on and we look forward to progressing our plans for Church Fields in Dublin 15, Cappagh in Dublin 11, Hayestown in Rush, Ballymastone in Donabate, and Hacketstown in Skerries where we are working with the Land Development Agency.”

Hugh Brennan, CEO Ó Cualann Cohousing Alliance, said: “Ó Cualann Cohousing Alliance welcomes the opportunity to work with Fingal County Council on this important scheme and we do not underestimate the challenges of delivering 39 top quality affordable homes and 12 social homes for the people of Fingal during a pandemic. We are confident that with the continued support from Fingal County Council and all the stakeholders we will do just that, and, in under two years, there will be a thriving community in Dun Emer, Lusk, County Dublin.”