Preparations for St. Patrick’s Day this year are underway with seven parades organised across the county with Malahide set to host their first parade. The parades will yet again be lively celebrations of all things Irish and a fun day out for everyone. 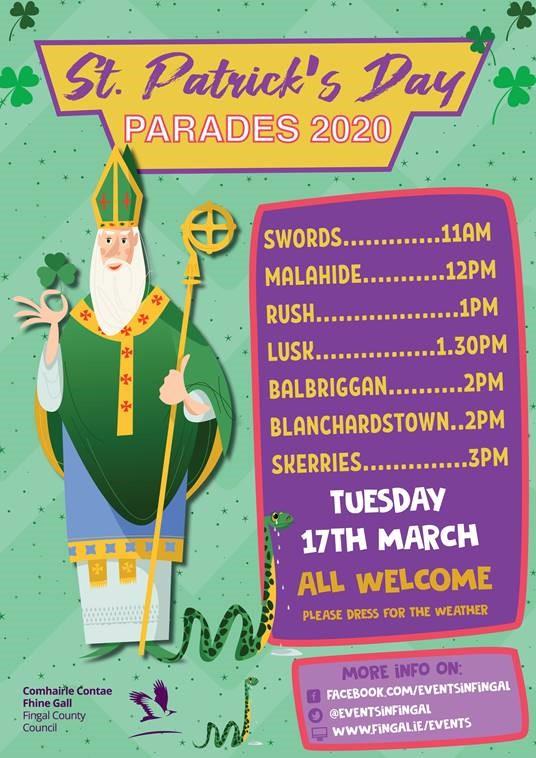 Over 100,000 residents are expected to attend the parades, over 15,000 people will participate alongside up to 1,000 community organisations and businesses in the parades. This will be a huge boost to local economies as thousands of people will be packing the streets to enjoy the day.

Mayor of Fingal, Cllr. Eoghan O’Brien said: “St. Patrick’s Day is a significant cultural event each year and the parades allow Fingal residents to celebrate it in their own communities. The parades are an opportunity for residents to see and engage with local community groups and businesses in their area. I look forward to attending the parades in Fingal and seeing all the diverse and creative floats this year. I would particularly like to welcome the addition of Malahide to the Fingal St Patrick’s calendar.”

The history of Balbriggan will be front and centre in their parade this year with the theme being the ‘Sacking of Balbriggan’, which took place a hundred years ago.

AnnMarie Farrelly, Chief Executive of Fingal County Council. added: "The Malahide community will be hosting their own St. Patrick Day's Parade this year. Fingal County Council is delighted to be supporting this parade and all the other community-led parades in the county. The Fingal Events team works to organise parades that are an entertaining and inclusive cultural celebration."

Fingal County Council would like to welcome everyone to enjoy the parades. Locations and starting times on Tuesday, March 17 are as follows:

Please find updated road closures and diversions that will be in place for St. Patrick's Day in Fingal here