The fourth annual Fingal Festival of History was launched by the Mayor of Fingal Cllr. David Healy on Thursday 3 September. 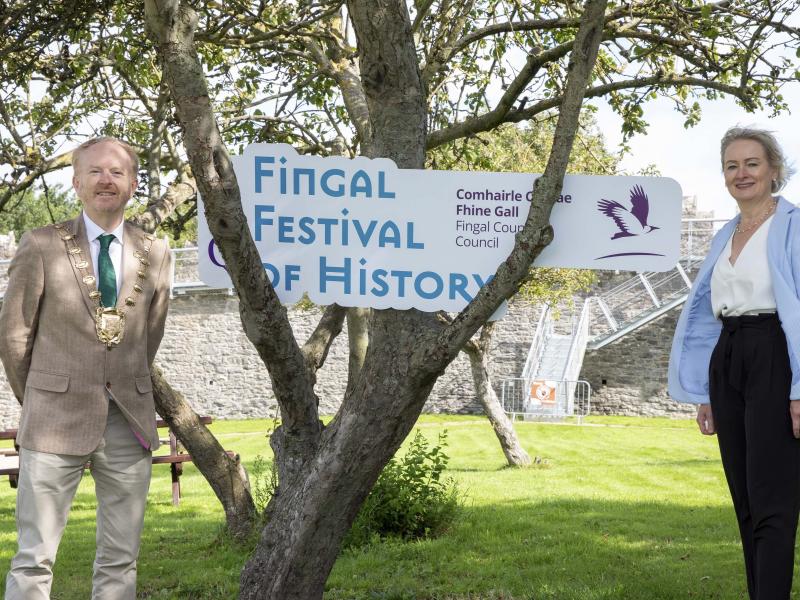 This year’s festival will take place online with all talks being made available on the Fingal Libraries YouTube channel and social media platforms throughout the week of the festival from September 12 to 19.

The centenary of the Sack of Balbriggan takes place this year and provides the main theme for our Festival.  This year’s programme again features the History at the Castle day with a variety of speakers presenting on topics relating to the Sack of Balbriggan, the War of Independence and other political conditions relevant during this period of Ireland’s history.

The Mayor of Fingal, Cllr. David Healy said: “With everything that has happened so far this year it is important to have a perspective on things. It is important that we take time to look back on our history, and it is fantastic that this year’s Festival of History will still be taking place. Like most events these days it will be done differently with all the history talks being recorded in the Chapel at Swords Castle. I would like to thank all of the Library staff of Fingal County Council who have made these talks possible.”

County Librarian Betty Boardman said: “We were determined to go ahead with the Fingal Festival of History this year despite COVID-19.  However, this will be a festival with a difference, because due to very necessary COVID-19 restrictions, there will be no live audiences, but the talks will be recorded and broadcast for people to enjoy on our YouTube channel and our social media platforms.  Staff in Libraries have put together a fascinating programme marking the centenary of the Sack of Balbriggan and the 175th anniversary of the visit to Ireland of Frederick Douglass, African American abolitionist and former slave.”

To conclude David O’Connor accompanied by Aidan and Helen Lawlor will perform a selection of music and songs relating to the period and songs will include ‘The Bold Black and Tan’ and ‘Kevin Barry’.

AnnMarie Farrelly, Chief Executive of Fingal County Council, said: “The Festival of History is such an important annual event for Fingal, and it is fantastic to see the dedication that our Library’s team have put in to make sure that the Festival could take place this year. The focus of this year’s Festival will be the centenary anniversary of the Sack of Balbriggan and a wonderful programme of talks have been lined up to commemorate this event, I would recommend to everyone to watch these talks across our various social media platforms.”

A special feature of this year’s Fingal Festival of History is the specially commissioned exhibition produced about the Sack of Balbriggan. The exhibition, curated by Catherine Keane, Senior Librarian, Fingal Libraries will be on display in the Atrium at County Hall, Swords during September.  This exhibition will also be available for viewing online.

The exhibition will include six mounted information panels and the display of original documents specific to this event including, original hand-written Minutes of meetings of Balbriggan Town Commissioners, an original copy of the Decree of Compensation for Criminal Injury to Property awarded to a Clonard Street resident and the acknowledgement by William Cochrane that he will attend a meeting regarding the matter with the Provisional Government and Michael Collins.  British Pathé news reels footage showing the aftermath of the destruction will also form part of the exhibition.

Director of Services Margaret Geraghty said: “I am delighted to see this great programme continuing this year albeit in a different format than previous years.  This is a very special year for Fingal, commemorating the Sack of Balbriggan which has a special focus in this year’s programme, and I would encourage as many people as possible to view these talks on the various Fingal Libraries social media platforms.”

You can download the Festival Brochure here: Fingal Festival of History 2020