Fingal County Council is delighted to announce the official opening of the Casino Model Railway Museum, Malahide following the completion of a €4m restoration programme on the historic Casino building and conservation of the Fry Model Railway Collection.

The Casino building which occupies a prominent position at the entrance to Malahide is the only cottage Orne of this type in Fingal and is of significant historical importance to Fingal’s architectural heritage.

It has been carefully conserved, restored and extended to become a modern visitor attraction that is now the permanent home of the Fry Model Railway collection which is also of great historical importance not only to the people of Malahide but to model train enthusiasts worldwide. The carefully conserved collection is truly a national treasure that will now be displayed permanently for future generations to appreciate and enjoy.

As well as the Fry Model collection, the museum will also accommodate a large modern model railway layout depicting several railway scenescapes in Ireland, interactive displays, soundscapes, an education and exhibition space and historical interpretations and memorabilia from Irish Railways.

The project which has cost approximately €4m to deliver has been funded through Fingal County Council’s capital programme and a generous donation of €1.5m from the late Mr Michael Gaffney of Malahide.

The official opening of this unique and very special visitor attraction by Mayor of Fingal Cllr Eoghan O’Brien marks the culmination of a project that first began over a decade ago and will be a valuable addition to the already extensive and impressive portfolio of heritage properties owned by Fingal County Council.

Fingal County Council’s Chief Executive AnnMarie Farrelly, County Architect Fionnuala May and Director of Economic, Enterprise and Tourism Development Emer O’Gorman, were present at the well-attended opening in addition to local councillors, elected representatives and members of the local community.

Mayor of Fingal Cllr Eoghan O’Brien said: “I am delighted to be here today to officially open the Casino Model Railway Museum, which has been beautifully conserved and restored. The redevelopment of the Casino has been one of the most eagerly-anticipated projects in the Malahide area so it fills me with pride to be able to stand here today to open this wonderful heritage property.

“It goes without saying that the Casino Model Railway Museum will be a spectacular amenity for local and visitors, both young and old, to enjoy for years to come.

“I would like to pay tribute to the Malahide Group, comprising GV Wright, Colette Smith, Michael Howard, Matt Ryan Jnr, Nora Owen, Matt McNulty and Alfie O’Dowd, who worked tirelessly over the years to ensure this project got to this point today.”

The Mayor also commended Fingal County Council for investing significantly in the project, and paid tribute to the late Micheál Gaffney for his generous donation towards the restoration of the building.

It goes without saying that the Casino Model Railway Museum will be a spectacular amenity for local and visitors, both young and old, to enjoy for years to come 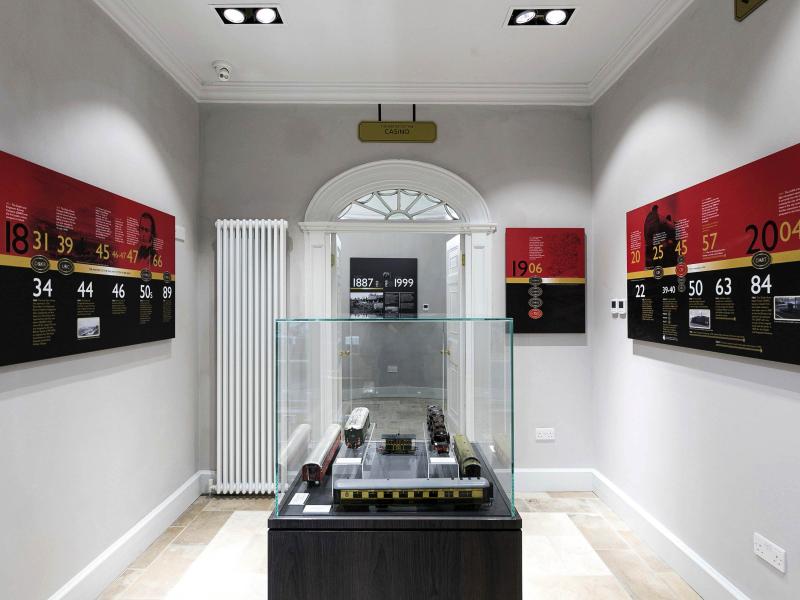 Fingal County Council Chief Executive AnnMarie Farrelly said: “The restoration and redevelopment of the Casino building has been a major capital project for Fingal County Council and I am delighted to be here today at the official opening of our newest heritage property. This is a truly wonderful day for the Malahide area, and indeed Fingal as a whole, and I have no doubt that the Casino Model Railway Museum will become a popular tourism attraction going forward.

“The Casino is a unique property and the meticulous restoration and conservation work will ensure that the public will get to enjoy this modern visitor attraction accommodation in such an architecturally significant and historic building.”

Director of Economic, Enterprise and Tourism Development Emer O’Gorman said: “The Casino Model Railway Museum is a wonderful addition to Fingal County Council’s heritage property portfolio, which includes Malahide Castle and Gardens, Newbridge House and Ardgillan Castle. Tourism development is a vital element of our department’s work and this new property will be a great addition to our offerings for residents as well as visitors from both home and abroad.”

County Architect Fionnuala May said: “The design by Fingal County Council architects on behalf of the Economic, Enterprise and Tourism Development marries the historic original cottage with a complementary new building. The Council has worked closely with all the contractors appointed to the project to ensure that each of the elements of the project were carried out by skilled craftspeople who are experts in their field. Its completion is a credit to each, and every person involved from the project’s inception to its successful completion.”

Fingal County Council has awarded the contract for the operation of the Casino Model Railway Museum to Shannon Heritage, who by working closely with Fingal County Council are committed to ensuring the museums’ success as a visitor attraction for domestic and international visitors.  Six people will be employed at the new museum.

Fingal County Council are delighted to announce that the long awaited and highly anticipated Casino Model Railway Museum is now open to the public and that all visitor information can be found on the official website https://www.modelrailwaymuseum.ie/