Fingal County Council is removing three wrecks from Balbriggan Harbour as part of its plans to improve the Harbour under the Balbriggan Rejuvenation Plan. 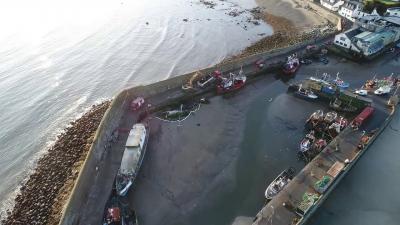 The operation was led by a team from the Council’s Operations Department. As the boats were lifted out of the water they were placed on a truck and taken away for break-up. Some of the wrecks had been lying abandoned in the Harbour for a number of years.

Improving the Harbour is one of the 20 things to be undertaken in the first 12 months of the Our Balbriggan 2019-2025 Rejuvenation Plan and, in addition to removing the wrecks, it is also planned to install lighting inside the town’s historic viaduct bridge and supply power to the Harbour. Other works in the pipeline include the refurbishment of the RNLI Boat House.

These improvements will mark the beginning of a process of reimagining the harbour area, creating an exciting, lively pier and waterfront, linking numerous leisure and tourism opportunities.

The Mayor of Fingal, Cllr Eoghan O’Brien, said: “This is a significant moment for the Our Balbriggan project because the harbour area has huge potential and its redevelopment is a key part of the Rejuvenation Plan.”

The Interim Chief Executive of Fingal County Council, AnnMarie Farrelly, said: “The Our Balbriggan team are working hard to fulfil their commitment to have 20 things done in the first year of the Plan and over the next few months there will be further improvements made to Balbriggan Harbour in order to fulfil the pledge to improve Balbriggan Harbour.”