Fingal County Council condemns the removal of part of the coastal erosion defence system at Burrow Beach, Portrane, by unknown individuals over the weekend and is shocked at the reckless damage caused to the dune system in an environmentally sensitive location which is designated as a Special Protection Area. 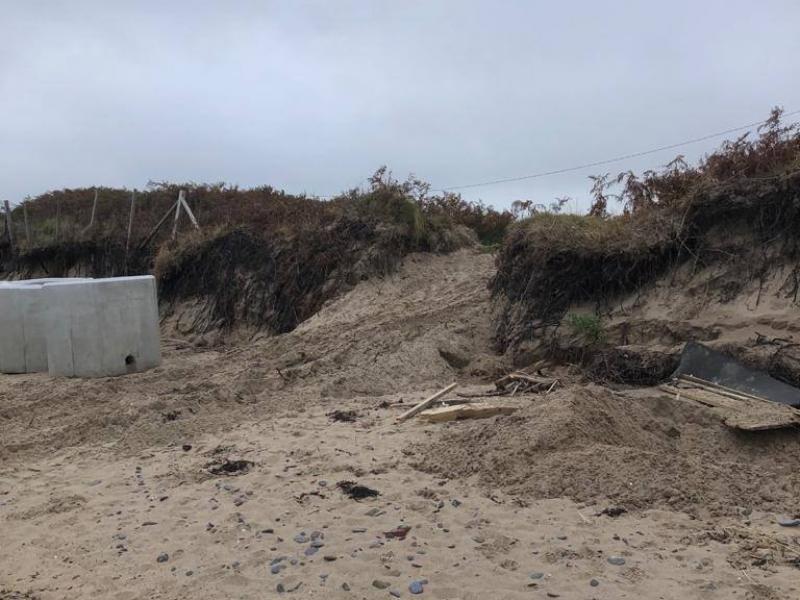 Using heavy duty machinery, these individuals removed up to 70 Seabees, each weighing 1.5 tonnes, from the line installed by the Council this summer and placed them at the foot of the sand dunes near Beach Lane damaging the current dune system in the process. The Gardai and the National Parks and Wildlife Service have been notified of the incident.

While acutely aware of the dilemma currently facing some householders and business owners in Portrane, research has shown that localised ad-hoc solutions to preventing coastal erosion do not work and actually cause the dunes to become more vulnerable to damage from storms leading to accelerated erosion.

The 1km line of almost 1,000 Seabees was placed in the optimum position to slow down the rate of erosion at Burrow Beach by specialist engineers from RPS, who have been working with the Council for several years on a long-term strategy for managing the erosion issues at Portrane.

The Seabees cost €1.5m to install and there is a major fear that the units which were removed may now be unusable as specialist equipment had been required to move them into their original positions. The Council will incur significant costs to rectify this situation at a time when resources are under significant challenge because of the economic impact of COVID-19.

The Seabees are an interim solution pending the installation of specially designed Y-shaped groynes structures which will be complimented by a beach re-nourishment scheme in order to achieve a suitable beach level. This will reduce incident wave energy along the coastline by limiting the prevailing water depth and thus mitigating the threat of erosion.

Fingal County Council continues to work with residents and business owners affected by coastal erosion at Portrane and remains committed to delivering a long-term solution to the issues being caused by coastal change.

Last month Fingal County Council held a series of live online information sessions with residents and business owners to brief them on the Coastal Flooding and Erosion Management Plan for Rogerstown Estuary.

In 2016, Fingal County Council established The Fingal Coastal Liaison Group in response to the ongoing concerns in relation to Coastal Erosion and Coastal Flooding in Fingal and to meet the need for a coherent structured response to address these concerns and improve communication between relevant stakeholders. The Group provides a forum for discussion of the approaches to planning for and dealing with the problems of Coastal Erosion and Flooding and is made up of County Councillors, Council Officials and community members from each of the affected areas in Fingal which are Rush (North Beach and South Beach), Portrane and Sutton.

Coastal flooding and erosion along the Rogerstown Estuary, which is an environmentally sensitive area, is proving to be a difficult problem to resolve. The coastal system around the Rogerstown Estuary is intricate due to the large difference between high and low tides and the damage that waves, which approach from different angles, can cause. This threat has been increased significantly in recent years by the number of major storms that have coincided with high tide water levels in excess of four metres.

Fingal County Council is working in collaboration with the relevant State agencies, including the Office of Public Works (OPW) and the National Parks and Wildlife Service (NPWS), on this issue with the specialist engineers from RPS. The Minister for Housing, Local Government and Heritage, Darragh O’Brien, TD, recently established the National Coastal Change Management Strategy Steering Group which has been tasked with considering the development of an integrated, whole of Government, coastal change strategy and is due to report to Government within six months of its establishment with initial findings and recommendations.

The Rogerstown Coastal Flood and Erosion Risk Management Plan can be viewed at https://consult.fingal.ie/en/consultation/coastal-defence-proposals-portrane-rush.