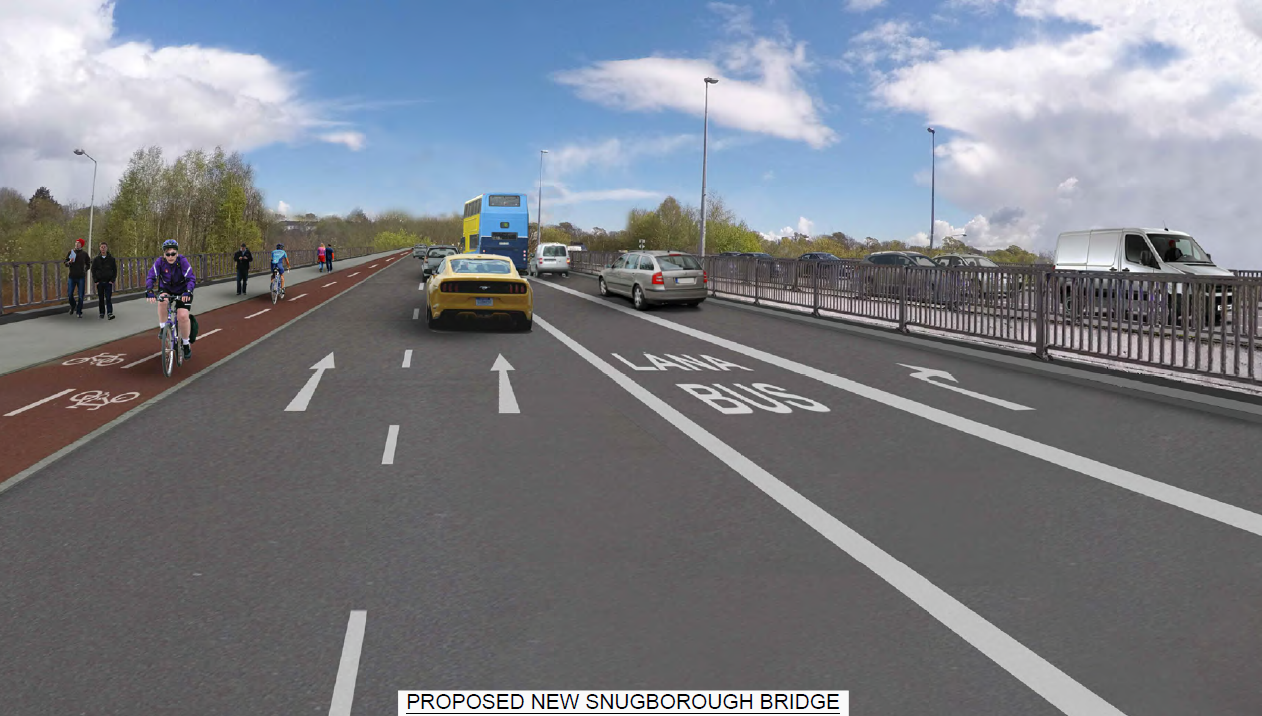 The project, co-funded by the National Transport Authority, includes the construction of a second bridge over the N3 national primary route as well as new bus lanes, footpaths, protected cycle tracks and traffic lanes giving improved accessibility to Blanchardstown Shopping Centre and the Dublin Enterprise Zone in Mulhuddart.

The scheme has been designed to address network congestion issues and deliver significant improvements for pedestrians, cyclists and bus services. The cost is expected to be in the region of €22m.

Measures to improve the operational efficiency of the two junctions either side of the N3 including bus priority measures that will support the Bus Connects project are included in the project.

Subject to Covid-19 restrictions on construction sites, works are expected to start in March with an expected duration of 24 months. The works will involve significant traffic management on the N3 and Snugborough Road and further details will be communicated to the local community and other stakeholders as they are developed by the contractor and Fingal County Council.

Cllr John Walsh, chairperson of the local Area Committee, said: ‘The completion of this scheme will have major benefits for residents and businesses in Blanchardstown and the wider Dublin 15 area and is badly needed to relieve traffic congestion at one of the most heavily used junctions in Dublin 15. Improving active travel connectivity and accessibility is a key priority for Fingal County Council and the upgrade will allow for a valuable improvement to the cycle and pedestrian network in Blanchardstown and surrounding areas in Dublin 15, as well as reducing waiting times for people travelling by bus.”

AnnMarie Farrelly, Chief Executive of Fingal County Council, said: “The upgrade of the Snugborough Interchange is of strategic importance to the development of the Dublin 15 area. As well as providing for significant improvements for motorists, pedestrians and cyclists, it has a vital economic element as the upgrade will facilitate improved accessibility to the 800 businesses located in the Dublin Enterprise Zone.”

Matthew McAleese, Director of Planning & Strategic Infrastructure, stated: “Snugborough Interchange, which is a key project within our capital programme, will provide for significant transport improvements to Dublin 15. We welcome the NTA’s commitment to part fund this scheme and we are looking forward to delivering this project.”

Micheal Aherne, Head of Transport Development in National Transport Authority, stated: “The NTA are delighted to partner with Fingal County Council on this valuable improvement to the cycle and pedestrian and bus network in Blanchardstown area. This project is part of the five year walking and cycling plan for the Fingal area which along with Bus Connects will see a substantial investment in sustainable travel infrastructure for the Dublin 15 area in the coming years.”