The Hill of Howth Tramway 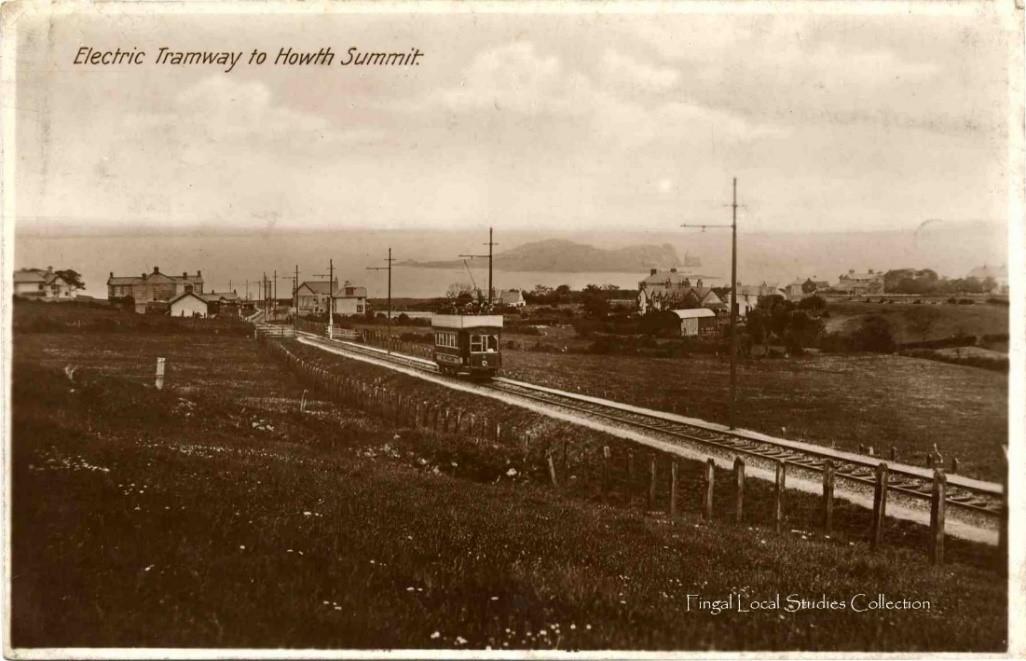 Up until the 19th century Howth was a remote place with the small communities living there able to produce much of what they needed for themselves. As a result, no real roads or routeways in and out of the peninsula were developed. Journeys to the outside world were more likely to have been made on water than on land and the usual way of getting to Dublin city was by boat from Sutton harbor to the Liffey basin. Only wealthy people could afford to travel by land as hiring a stagecoach was expensive with fares priced at around 10 shillings. There was also the added cost of hiring armed guards to deter the highwaymen who plagued the routes to Howth in the hope of catching wealthy victims (Kilroy 1981: 92). It wasn’t until the 19th century when the British Government selected Howth as the gateway for the mail boat service that operated between Holyhead and Dublin that Howth Harbour was first developed (Kilroy 1986: 99). The harbour was constructed in 1807 using local rock from the nearby Kilrock quarry. The work finished in 1817 and Howth became the mail boat station for Dublin in 1818 leading to the development of the Harbour lighthouse, a stagecoach inn and the Lower Road linking the Howth and Balscadden communities. These developments attracted the attention of competing railway companies operating in Dublin at this time with several of them proposing plans to captialise on the recreational potential of Howth. It was Great Northern Railways who won out in the end laying a tramway around the hill to connect it with the preexisting Howth railway station which had been developed in 1847 (Kilroy 1986: 12).

The tramline was officially opened on 1st June 1901 and was known as the Hill of Howth Tramway. The recreational nature of the line succeeded in bolstering local tourism with people using the line to go swimming in Balscadden beach in fine weather. Great Northern Railways incentivized their first-class passengers to participate by offering them private changing cubicles on the beach (Kilroy 1986: 9). The company also constructed the lower cliff path which now forms part of the famous Howth Cliff Walk for their passengers to enjoy. The line was five miles long running from Sutton Station along Carrickbrack road, past St. Fintan’s Cemetery up through the gorse covered hill rising 365 feet above sea level at the summit. This was the most popular stop as it offered magnificent views across Dublin Bay. Passengers who alighted here could treat themselves to welcome refreshment in the pavilion which once stood on the summit. Of course, it was a different story in poor weather as the roofless tram cars would have offered little protection against the rain! It was even recorded that during storms the unfortunate driver used to get drenched by waves lashing against the tram (McBrierty 2005: 38). From the summit the tram ran down into Howth and terminated at the railway station. 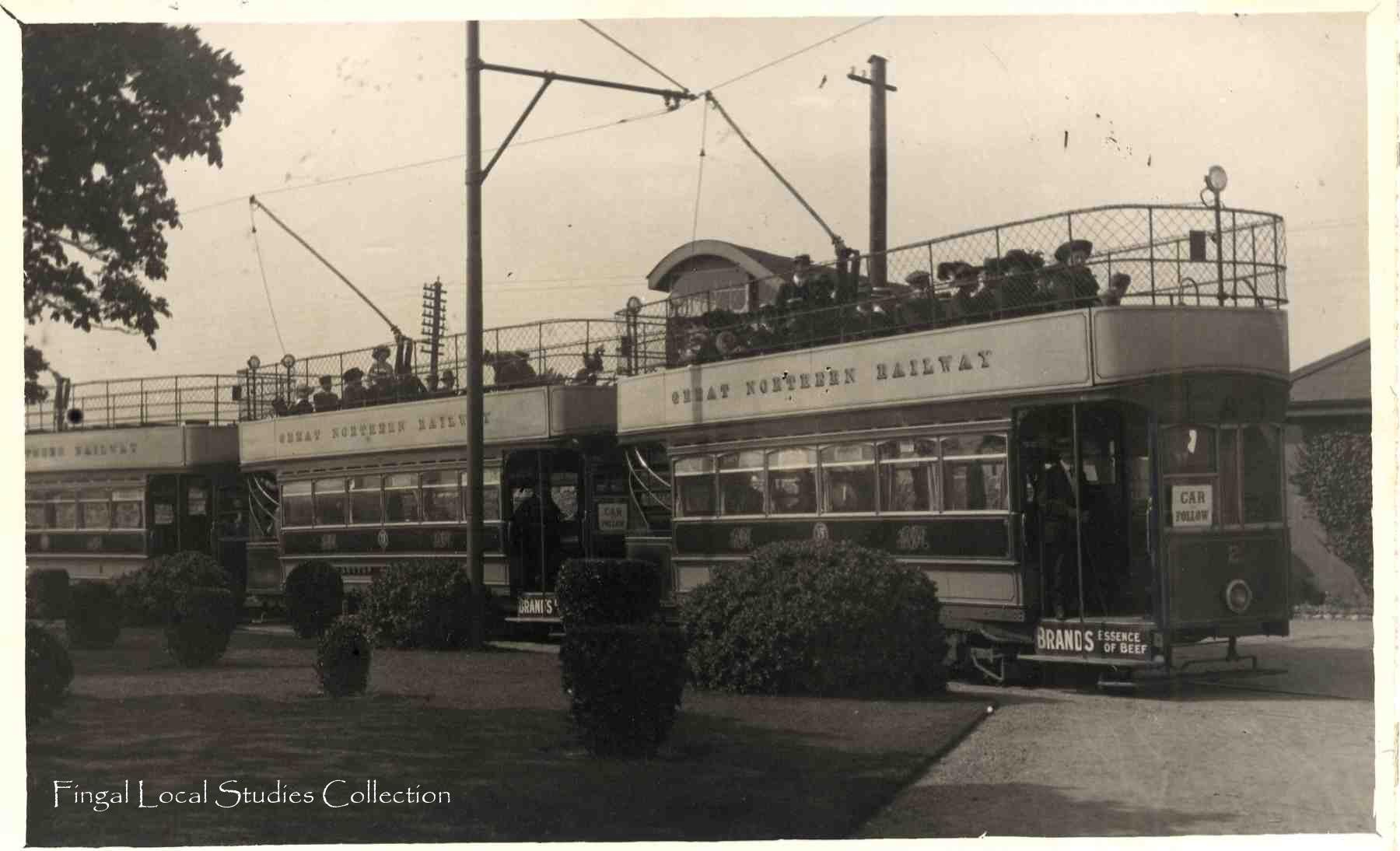 Road improvements in the 1920’s meant bicycles, motor cars and the bus became more popular methods of transport than the tram system. In 1958 CIE (Córas Iompair Éireann) took over the Great Northern Railways and despite promises to keep the line running they allowed for the deterioration of the cars to the point that it was not economically viable to keep them, and the line closed one year later (McBrierty 2005: 38). Some of the trams were rescued when they were acquired by Britain’s National Tramway Museum at Crich in Derbyshire while others were sent to Belfast and even as far afield as California! Tram No. 9 which was the last tram to run on the line was kept and restored by James Kilroy at Castleruddery in 1979. However, years of wear and tear, neglect and eventually vandalism meant the restoration work was intensive with many elements needing to be reproduced entirely. The restoration took over 14 years and was eventually completed in Howth where No. 9 can still be found today in the National Transport Museum located in the Deerpark estate.

Fingal libraries has just launched a special exhibition on the Hill of Howth Tramway which can be viewed in Malahide Library or online here. To accompany the exhibition is a video capturing memories of those who experienced the tramway firsthand which can be viewed here. Alternatively, if you would like to conduct your own research on the subject an appointment can be made with Fingal local studies. Or why not spend the day in Howth walking the old Tramline Loop walk and finishing off by viewing the restored No. 9 tram at the National Transport Museum?

Hill of Howth Tramway and Tram No. 9, National Transport Museum, accessed through http://www.nationaltransportmuseum.org/b004.html

Hill of Howth Tram, Ask About Ireland, accessed through https://askaboutireland.ie/reading-room/environment-geography/transport…

McBrierty, Vincent (2005), Howth Through The Eye of the Artist

Resurrecting Monuments Community Archaeology Group (2019), A Guide of the Archaeology of Howth Peninsula: The Story of Howth and its people, Dublin.

The Howth Peninsula: A guide to its wildlife, habitats and cultural landscape (2000), FÁS, Howth/Sutton.