Balbriggan is associated with its industrial past or its picturesque harbor. However results from recent archaeological excavations have shown the ‘town of the small hills’ to be part of a considerably more ancient landscape.

With access to the sea, rivers and good agricultural land the coastland around Balbriggan has always been a good place for human settlement since the earliest times. Indeed the Bremore passage tombs to the north of Balbriggan have long been thought to be older that those of Newgrange and Knowth in the Boyne Valley. Archaeological excavations in advance of the housing estates off Hamlet Lane uncovered Balbriggan’s first Neolithic house. This is where the tomb builders and first farmers of the area may have lived over 5000 years ago. The house was plank built, about 6m wide and had a doorway along its western side. Neolithic pottery, stone tools and a polished stone axehead were also found. 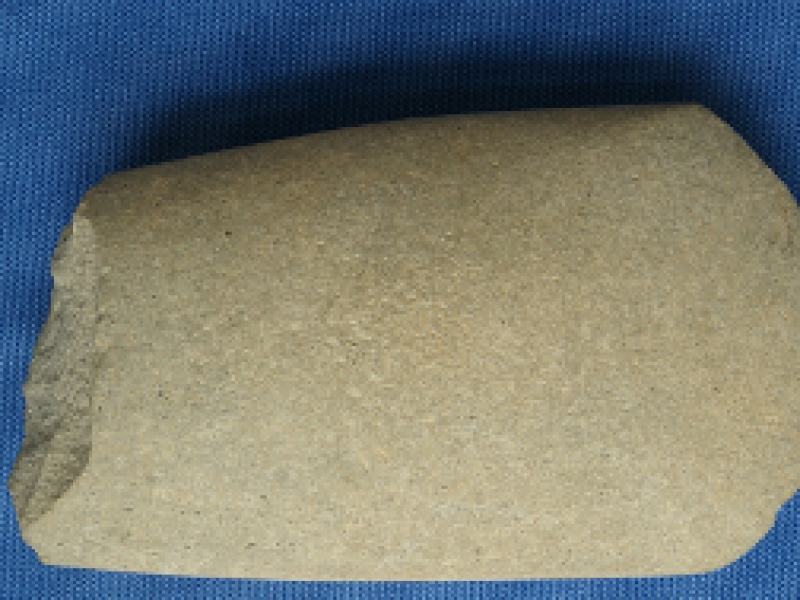 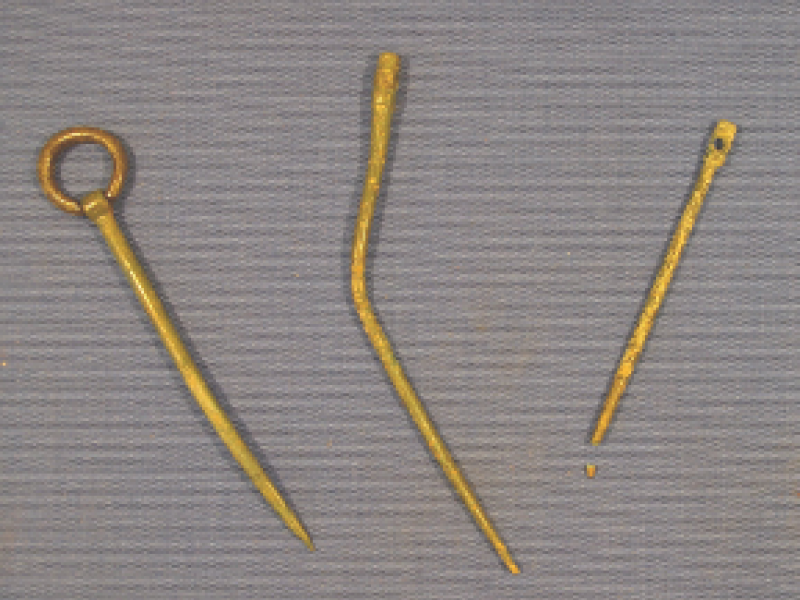 Pins worn by the early Christian inhabitants of Flemington and Clonard (courtesy of Teresa Bolger).

The best known early medieval site in the area is that or Lann Bechaire or Church of the Beekeeper at Bremore associated with Saints Molaga and Mo Domnóc, both of whom had been students of St David in Wales. The original foundation is thought to be located on the lands where the medieval church and graveyard of St Mologa, now stands, beside Bremore castle. Another known site of this period is to the west of the town at Stephenstown where a souterrain was identified by a farmer grading land. Subsequent geophysical survey uncovered a ringfort surrounded by a field system. Part of an outer ditch was excavated and was shown to be in use between the late 7th and mid-10th centuries. Under what is now Hasting Court in Flemington part of an extensive complex occupied during a similar period was excavated. Cereals were being threshed, dried as part of the agricultural activity there. Unusually specific water management systems including ditches and cisterns were in place indicating that it was probably very wet at this time. There may have been some comfort though as a sherd of E ware was recovered. This pottery is from western France and was used for importing wine so the inhabitants of Flemington in the 600s were used to their Bordeaux! 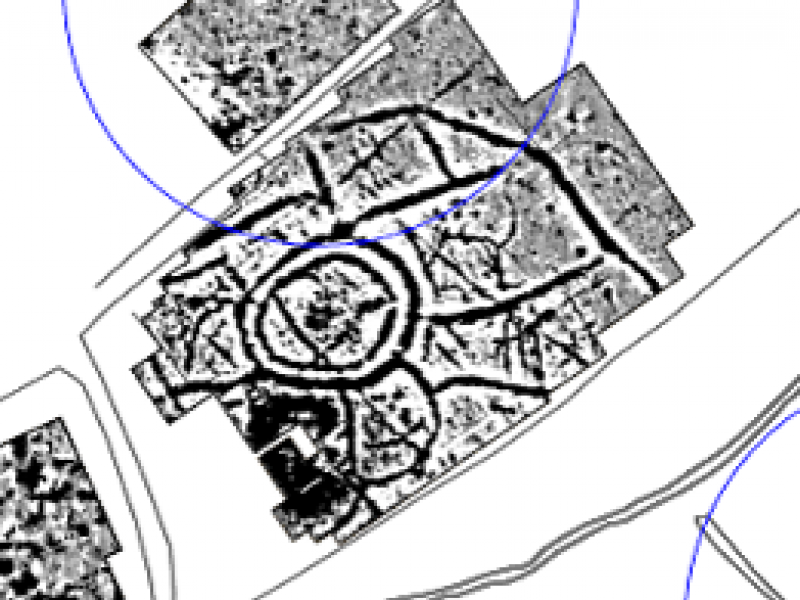 Geophysical Survey of the ringfort at Stephenstown by Target Ltd (courtesy of IAC Ltd.) 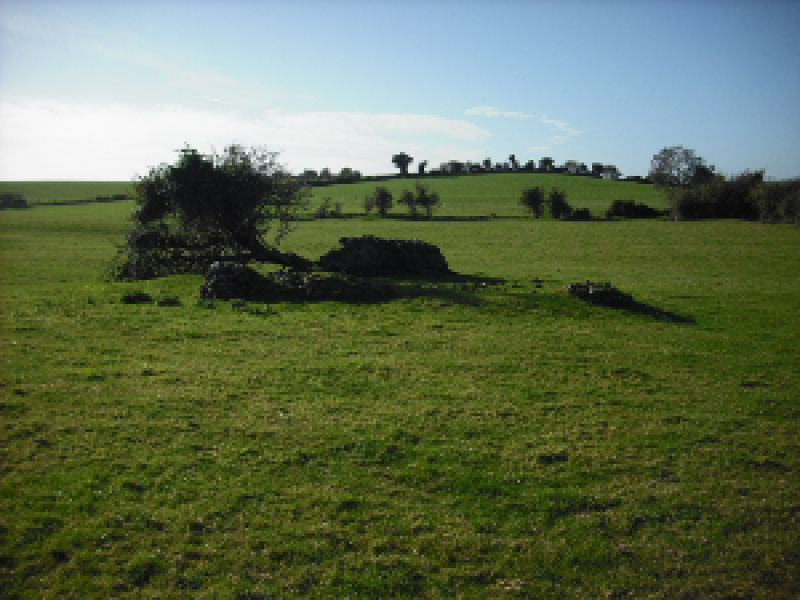 Marked on maps as a ‘castle’ the remains of a possible tower house have long been known in Stephenstown. It is associated with Elizabeth Finglas and was described as burnt in 1654. A little distance to the north the site of a chapel is recorded in Folkstown Little. However work on the Balbriggan Outer Relief road and the industrial lands between the castle and church uncovered medieval cereal drying kilns, possible house foundations and pottery of the 13thto 15th century indicating a indicates that there was medieval manorial settlement in the area. 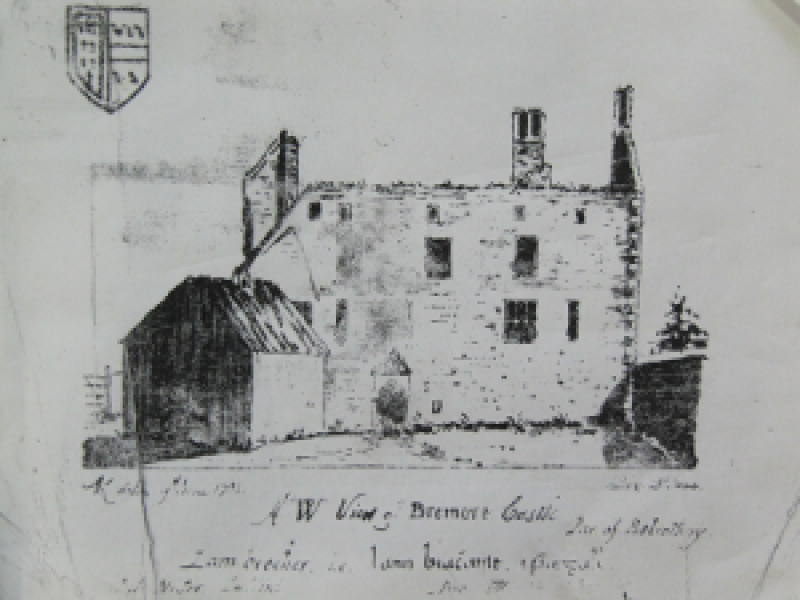 What we know of later settlement is focused on Bremore Castle where the Barnewall family had farmed from medieval times. A grant was made for a new harbour known as Orde or Newhaven, the remains of which can be seen below the headland at Bremore. The Barnewalls lived at Bremore Castle which in 1567 consisted of a castle, gardens, 8 tenements, orchard and park.  Apparently the castle was attacked during the Confederate wars as it was described as burnt in the 1640s. Archaeological excavations in the field next to the castle uncovered a cannonball presumably related to the attack.

In 1659 there were just 30 people living in Balbriggan (in contrast to the 204 in Balrothery) which was listed as the Great and Little Farme of Balbriggan. However in the early eighteenth century the fortunes of the town began to change when Baron Hamilton bought the estates of Balbriggan and Balrothery from the Barnewells. In 1762 George Hamilton had a limestone pier constructed and the lighthouse was added in 1769. From here corn and timber were shipped out to Liverpool and Dublin while slates and coal were imported. In 1780 the busy Baron also founded the cotton mills which Balbriggan had now become an important centre of manufacturing and trade. Also in 1780 a Joseph Smyth joined his cousin Mr Hatton in establishing the firm of Smyth & Co. in Balbriggan where it traded for over 200 years going on to boast  the Empress of Austria, the Czarina of Russia and Queen Victoria of Britain as customers. Outside of those directly employed in the cotton factories or working hand looms, the new town now attracted spinners, smiths, brewers, butchers, weavers and tailors. By 1837 the population of Balbriggan had grown to over 3000.

Tall tales can often have a kernel of truth in them especially when they grow up around placenames- ancient skeletons have been actually been found in fields known as the Bone field and long forgotten settlements in Old-towns. The Sailors Grave is a mound of stones to the north end of the King’s Strand so called as it commemorates the dead of the ships such as the Belle Hill and Sarah of Runcorn that were wrecked off the nearby Cardy Rocks. Tradition has it that visitors add a stone to the cairn.

That the parapets of Balbriggan Martello Tower were removed sometime after the 1920s and were used in the construction of houses on Drogheda Street?

That Sinead de Valera author of Irish Fairy Tales and wife of President Eamon de Valera was born Jane Flanagan in Balbriggan? She was baptized in SS Pater and Pauls church on 2 July 1878.

That children a hundred children some as young as five and six were employed in the mills of Balbriggan in 1789?