St. Catherine’s Park /Lucan Demesne is located in counties Fingal, Kildare, and South Dublin. It consists of 200 acres of woodland and grass land, with the river Liffey dividing the southern lands of South Dublin County Council from the remainder of the park.

The park contains a pedestrian bridge over the river which facilitates pedestrian access between Leixlip and Lucan. There is vehicular access and car parking is located off the Black Avenue in County Kildare; From the Lucan to Clonee Road; Near Laraghcon in Fingal; From the Leixlip Road (R835) in Lucan, South Dublin.

The park contains a pedestrian bridge over the river which facilitates pedestrian access between Leixlip and Lucan.

The key recreational and amenity uses of the park include: walking, including dog walking, jogging, cycling, formal sport, mainly soccer and Gaelic football, and canoeing.

St Catherine’s provides a very tranquil setting for walking through a combination of historical association, scenic views and woodland and river.

Jogging is also popular in the park. Loops of varying distances 2km – 5km through woods, along rivers and around fields offer sporty visitors a variety of scenes.

The famous Liffey Descent, a 25 mile canoe race passes through this section of the river. Canoeing is popular in the vicinity of the weir due to the presence of a sluice gate.

In addition, Fingal County Council recently developed a cricket pitch in the park.

The park is open from dawn until dusk, with unlimited pedestrian access from Glendale Estate in Co Kildare. 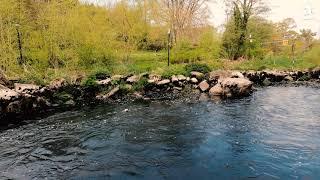