Translations of the Táin – Part 1 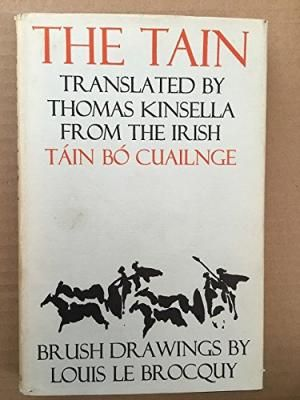 The Táin Bó Cuailnge (or the Cattle Raid of Cooley) is one of the most famous ancient Irish stories. Everyone has heard of the young warrior Cú Chulainn and his epic defence of Ulster against the forces of Connacht lead by mighty Queen Maeve. What is not as widely known is how the story has been preserved, transmitted, and translated through the ages. This blog post is intended to introduce readers to several versions of the story while also providing links to modern translations of the text which can be accessed digitally.

The Táin Bó Cuailnge is part of the Ulster cycle of stories which focuses on warfare and an elite martial class called the Ulaid (Ulstermen) (Mallory 2016: 20). The Ulster cycle is considered by many to provide a view of Celtic iron Age society in Ireland (Jackson 1964). It is thought that these stories existed as part of an ancient oral tradition before ever being committed to writing by monastic scribes in Ireland. Clues to the oral origins of the Táin Bó Cuailnge lie in its episodic structure indicating the tale may have been several separate stories compiled and woven together by scribes to form a grander narrative (Ní Bhrolcháin 20095: 53 – 54). As such the story we have today may represent elements from both Iron Age and early Medieval societies in Ireland (Mallory 2016). The earliest written version of the tale that we have is preserved in a manuscript called Lebor na hUidre (the Book of the Dun Cow) complied at Clonmacnoise in the 12th century. A similar version can be found in a 14th century manuscript called the Yellow Book of Lecan. These versions contain a form of the Irish language which linguists date to the 7th century and may have been copied from an older manuscript which is now lost (O hOgain 1991:414; MacKillop 2005: 201-2). A more developed and consistent version of the story was written down in a manuscript called the Book of Leinsteir which was compiled between the 12th and 13th centuries. This manuscript also contained remscéla (pretales) which set the scene for the main events in the Táin Bó Cuailnge. This version is the source of many of the modern translations we have today.

The Celtic Revival movement of the late 19th and early 20th centuries saw a renewed interest in early Irish literature preserved in medieval manuscripts. This in turn caused the production of several translations of the Táin into modern English. Some of these translations such as Lady Gregory’s 1902 translation left out parts of the original story that were too scandalous for 19th century society. It was not until 1969 that the poet Thomas Kinsella released his translation simply called The Táin. Around 1954 Kinsella became interested in translating the Táin Bó Cuailgne after having read the oldest version of the Deirdre story (also part of the Ulster cycle) (Kinsella 1969). Finding no adequate translations of the Táin Bó Cuailgne he decided to attempt to translate the older version of the tale preserved in the Lebor na hUidre manuscript. Already a professional poet when he began, Kinsella used his affinity for language in a fifteen-year long struggle to translate the obscure and dense old Irish language contained in the manuscript.