The Town of the Rider

The Town of the Rider

Balrothery is a small town in north Fingal located just south of Balbriggan. Its Irish name Baile an Ridire meaning ‘The Town of the Rider’ reveals the importance of the routeways running through it. Local stories surrounding the town are also reflective of this:

After the battle of the Boyne in the year 1690 when the Irish army had retreated southwards and were being followed by the English troops, they passed through the village of Balrothery. When [King] James was passing through Balrothery his horse lost a shoe and a blacksmith named Farrell shod it. When this blacksmith died, he was buried in the village graveyard and the hammer, and thongs were carved on a headstone over his grave. This headstone can be seen along the Church wall.

Other famous figures supposed to have passed through the town include Cú Chulainn, Columcille and Brian Boru to name a few (SC Vol. 0784: 17-19). In the case of Brian Boru however, it was only his corpse that travelled through after he died in the Battle of Clontarf (SC Vol. 0783: 72). It was said that his body was left for one night in Balrothery church on the way to his final resting place in Armagh (SC Vol. 0783: 66-7). The Medieval church of Balrothery is no longer standing but was replaced by the 19th century church which still stands today (NMR: DU03074). 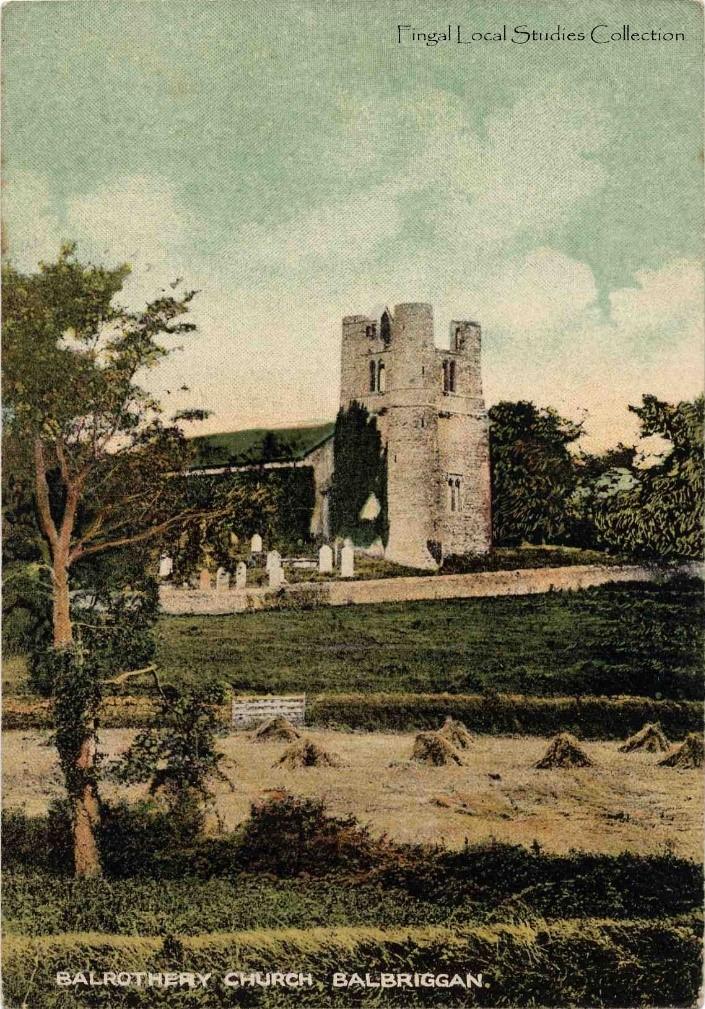 The graveyard associated with this church can still be visited and is home to several unique headstones decorated with folk art (Mytum 2004). These headstones are part of a long line of funerary monuments embedded in the Balrothery landscape which include Bronze and Iron Age cremations as well as later Christian burials. Evidence for settlement in Balrothery comes from the remains of a Bronze Age house and a late Iron Age/Early Medieval hilltop enclosure found during archaeological excavations (NMR: DU02466; DU04577). The tight concentration of these multi-phase remains within the area of the town shows it was a key point in the landscape over a long period. Local stories about the pre-Christian hero Cú Chulainn, Early Medieval Saint Columcille and High Medieval king Brian Boru passing through reflects the long use of a route way through this area. This routeway may have been part of an ancient road which led from Tara to Navan Fort (Deery & Goucher 2019: 34). The Old Coach Road which connects Ballough beside Lusk to Gormanstown in Meath may be a later developed part of this ancient road. As its name suggests this road became an important passageway for coaches especially the mail coach which carried letters between Dublin and Drogheda. The infamous highwayman ‘Collier the Robber’ was said to have held up these coaches on several occasions using various tricks. According to one story:

He arranged seven old hats on sticks at the back of a wall and made it appear that they were armed men. Then when the mail-coach came he jumped from his hiding place and shouted, "deliver up." Then he told his supposed men not to fire until he would tell them. The money was handed over to him, and it is said that he gave it to the poor people of the district.

Balrothery today has been somewhat subsumed by the rapid urban development of Balbriggan. However, it’s worth noting that the name Balrothery is given not just to the town but to the baronies of Balrothery East and West encompassing Balbriggan, Skerries, Rush, Lusk, Ballyboghil, Old Town and Garristown. That these larger divisions of land take their name from the town is indicative of its ancient importance.