There was much more to 1970s science-fiction than Star Wars. Alan from Malahide Library recalls Logan’s Run, a film which he champions as a “jewel in the crown” of the golden era of sci-fi cinema. 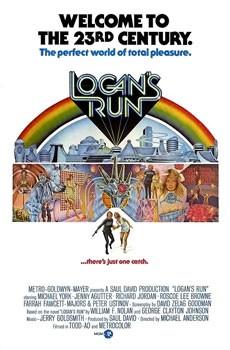 The most famous science-fiction film of the 1970s is undoubtedly Star Wars, released in 1977 to enormous success and beginning a highly successful franchise which still thrives today.

But there was far more to 1970s science-fiction than just Star Wars. One need only think of titles such as THX 1138, Silent Running, Solaris, Westworld, Solyent Green, Dark Star, The Man Who Fell to Earth and Alien to realise that this decade was something of a golden era for intelligent science-fiction cinema.

Another jewel in the crown of this golden era was undoubtedly Logan’s Run, released in 1976. While successful in its time, Logan’s Run did not achieve the stature of Star Wars, which arrived a year later, but remains a cult favourite up to the present time.

Logan’s Run was directed by Michael Anderson, and loosely adapted from a novel by William F. Nolan and George Clayton Johnson, published in 1967.

The events of the film take place in the year 2274, when humanity resides within a domed city which is controlled and ruled by a computer. The population and the consumption of resources are maintained in equilibrium by the (mostly) voluntary execution of everyone upon reaching the age of thirty, which is termed “Last Day”.

Life inside the domed city is largely hedonistic, with people focused on the pursuit of pleasure. But all good things must come to an end, and a crystal embedded in the palm of everyone’s right hand, called a “life clock”, changes colour as they grow older and begins blinking as a person approaches “Last Day”.

They must then undergo voluntary execution by incineration, during an eerie ritual called “Carousel” which is attended by large crowds of spectators and viewed with a disconcerting mixture of awe and frenzied glee.

Those undertaking voluntary incineration do so in the belief and hope of a possible “renewal”. However, not all are prepared to do so, and those who attempt to flee from this fate are known as Runners.

Logan (played by Michael York) is a Sandman, one of those whose duty is to hunt down and terminate Runners. But he is astonished to find himself tasked by the ruling computer with locating and destroying a place called Sanctuary, a destination sought by Runners who attempt to escape the city.

When Logan is twenty-six years old he finds that his “life clock” has been altered to indicate that he is approaching “Last Day”. He becomes a Runner who must flee for his life in search of Sanctuary.

Logan finds a companion in Jessica (played by Jenny Agutter), a member of a secret group which seeks to help Runners to escape to Sanctuary. During their journey, they are pursued by Logan’s former friend and fellow Sandman, Francis (played by Richard Jordan).

Escaping many dangers, Logan and Jessica discover that the Runners who have escaped the confines of the city have been frozen, for usage as food, by a food processing robot called Box, which was originally programmed to capture food outside the city for the inhabitants.

Logan and Jessica successfully escape the city to discover the remains of the former human civilisation now a wilderness. In an old, desolate city, which the viewer recognises as Washington, D.C., in the remains of the United States Senate Chamber, they are amazed to meet an old man (played by Peter Ustinov). After speaking with him, they realise that Sanctuary does not exist.

Along with the old man, Logan and Jessica return to the city, and after further struggles the ruling computer malfunctions and breaks down. The population are now able to leave the city, to behold the old man with wonder and discover the new world awaiting them outside, free to live their lives beyond the formally proscribed age of thirty years.

Metro-Goldwyn-Meyer’s interest in adapting the novel Logan’s Run was originally spurred by the huge success of such science-fiction films as 2001: A Space Odyssey and Planet of the Apes, both released in 1968.

The film’s budget was originally projected to be $3 million, but eventually rose to be $9 million, an expensive film in the mid-1970s.

It has been said the science-fiction often examines the present, even when the narrative takes place at a future time, and the same could be said of Logan’s Run. It examines the possible pitfalls of hedonism, worship of youth, and a society where euthanasia is universally supported.

Logan’s society is one where the pursuit of pleasure is the paramount fact of life. This was perhaps a reflection upon what became known as the “Me generation”, the narcissistic culture of the younger generation of the 1970s, obsessively concerned with “self-fulfilment” and “self-realization”. In Logan’s world, realities such as aging and death are kept at bay. Even obliteration during Carousel is softened with the promise of possible “renewal”.

Indeed, Michael York has spoken of how initially he was reluctant to accept the role of Logan. However, a young member of the Ahmanson Theatre company, who was temporarily acting as his driver, heard York’s comments on the script and asked to read it. After reading the script, he strongly advised Michael York to take the part, assuring him it strongly tapped into the spirit of the current times and reflected the zeitgeist.

Upon release, Logan’s Run received mixed reviews but was a box-office success. At the following years Academy Awards it won a Special Academy Award for visual effects.

The success of the film led to a spin-off television series which ran for one season of fourteen episodes throughout 1977-1978. For this production, Gregory Harrison (later to star in the long-running television series Trapper John, M.D.) assumed the role of Logan, while Heather Menzies played Jessica.

The film was faithful to the basic premise of the film and earlier novel, with Logan and Jessica fleeing the “City of Domes” to escape death at the age of thirty in search of the mythical Sanctuary.

William F. Nolan, co-author of the novel, was involved in writing the pilot episode. The domed city and Carousel were seen in the pilot episode, using recycled footage from the film. A departure from the film, and original novel, saw the city under the control of a circle of older citizens rather than a computer.

For the series, Logan and Jessica were joined by a new character, an android called Rem, played by Donald Moffat. Pursued by Francis (now played by Rudolph Powell), they now travelled in a hovercraft-type vehicle.

Over the course of the season, their adventures included encounters with robots, aliens, and alternative human societies.

Despite decent ratings, the show was cancelled. It was sold overseas and was shown in the United Kingdom, Ireland and Australia. To this day, it is remembered fondly by viewers.

Since the mid-1990s, various plans have been afoot for a remake of Logan’s Run, but to date none have come to fruition.

However, the film Logan’s Run continues to endure as an example of intelligent, unusual, and entertaining science-fiction cinema. By turns disturbing, thought provoking, and providing edge-of-the-seat excitement, its depiction of a pleasure-oriented society obsessed with youth provides Logan’s Run with a continuing relevance to our world today. A tale of the far future, it is as relevant to our present time as it was to the 1970s. Not all science-fiction films remain so relevant or endure so well.

Logan’s Run is widely available on DVD and Blu-ray. So, take the time to make that run with Logan and Jessica. It’s an experience not to be forgotten.