Primary Schools across Fingal are to receive a weather station rain gauge as part of an effort by Fingal County Council to produce more detailed rainfall records for the county.

The Deputy Mayor of Fingal, Cllr Robert O’Donoghue, launched the initiative today at the Rusk and Lusk Educate Together National School when he presented Third Class with the first rain gauge. The Council plans to distribute rain gauges to 100 primary schools across the county in time for the start of the new school year in September.

For the second phase of the project, the Council are seeking champion schools across the seven Local Electoral Areas to host an automatic weather station, which will be visible on Met Éireann’s wow.met.ie website and will provide real-time weather data. Schools interested in having an automatic weather station installed should email [email protected] before Friday, September 10.

Cllr O’Donoghue said: “This is a great initiative as the information gathered will be used to provide a more accurate understanding of river response to different rainfall depths and can be used by the OPW, Met Éireann and Fingal’s flood sections. Most importantly the project will help to further students’ knowledge of the key challenges faced by society including climate change and flooding.”

Sarah Gallagher, Head of Observations at Met Éireann, said: “Met Éireann are very supportive of the ‘Weather Stations for Schools project’ and we fully encourage schools across the county to get involved and help with the collection of important weather information.  Schools can easily enter rainfall measurement and other weather information collected from their weather stations onto Met Éireann’s Weather Observations Website, WOW-IE. This is a global network of weather observations where the public can view and share their measurements.  Not only are weather observations critical in helping meteorologists produce accurate weather forecasts, they provide an historic record of weather conditions that Met Éireann climate scientists use to monitor changes in the climate of Ireland.”

Oliver Nicholson, Head of Hydrology at The Office of Public Works, said: “The provision of these rain gauges to local schools will give students a greater appreciation of both normal and severe rainfall magnitudes. Children will also learn how these measurements are used for monitoring climate change, design of flood relief measures, weather forecasting and flood forecasting.  We believe that this initiative has great educational potential for all schools across the state.”

“The Innovation Fund facilitates staff submitting innovative ideas that can bring greater value to the Council, support new ways of working and create a positive impact for public services. It was launched in January and there were 14 applications from which four projects were subsequently chosen to be funded this year. This is the first of the four projects to be launched and, as well as providing valuable information, the data collection process by teachers and pupils will help to promote an appreciate of the water cycle and climate change challenges faced by the community,” said Ms Farrelly. 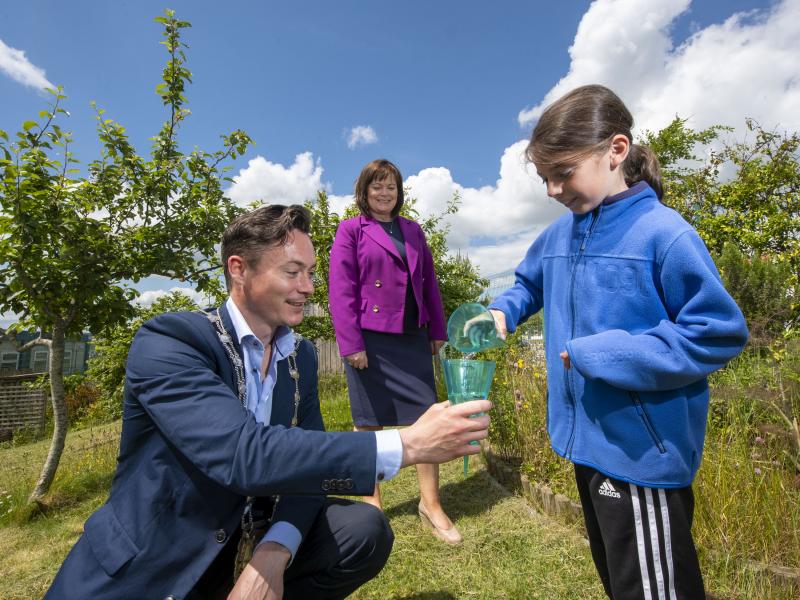