The latest milestone in the development of Rathmore Park as a major Active Recreational Hub for Lusk was recently reached with the official opening of the Play Trail. 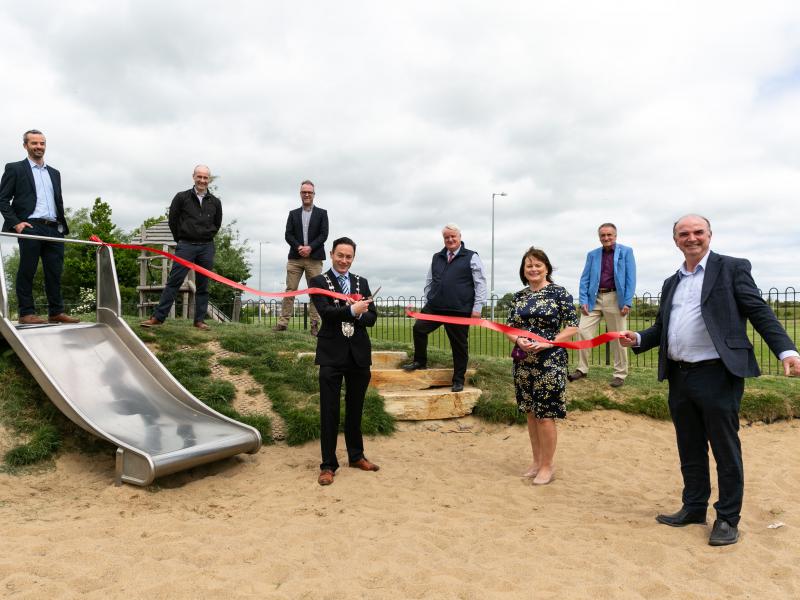 The Rathmore Park Play Trail is a new type of “Play Along The Way” facility which encourages children to move around the half-kilometre trail and visit a range of play equipment that offer a wide variety of challenges and play experiences.  Adults accompanying children also benefit from the fully accessible looped walk linking the play facilities around the perimeter of the park.

The play equipment provided along the Rathmore Play Trail features a high proportion of “natural“ materials such as wood and stone which are visually sympathetic to the setting of play facilities.

The official opening was performed by the outgoing Deputy Mayor of Fingal, Cllr Robert O’Donoghue and was attended by Cllr Cathal Boland, Cllr Brian Dennehy and the Chief Executive of Fingal County Council, AnnMarie Farrelly, as well as Senior Parks Superintendent, Kevin Halpenny.

“The Rathmore Play Trail is a great addition to Rathmore Park which is well used by the local community and will provide many hours of enjoyment for children and their parents,” said Cllr O’Donoghue.

About half of the land required for the development of Rathmore Park and the associated recreational hub has now been taken in charge by the Council and a sports pitch, floodlit jogging track and sprint track have been developed in response to the high demand for evening athletics training.

Kevin Halpenny, Senior Parks Superintendent with Fingal County Council, said: “The Play Trail has been designed in line with the principles of Fingal’s new “Space for Play” play policy which will be the subject of a public consultation process later this year. It is another important addition to Rathmore Park and we have plans in place for the further development of the Park as soon as the rest of the land is available.”