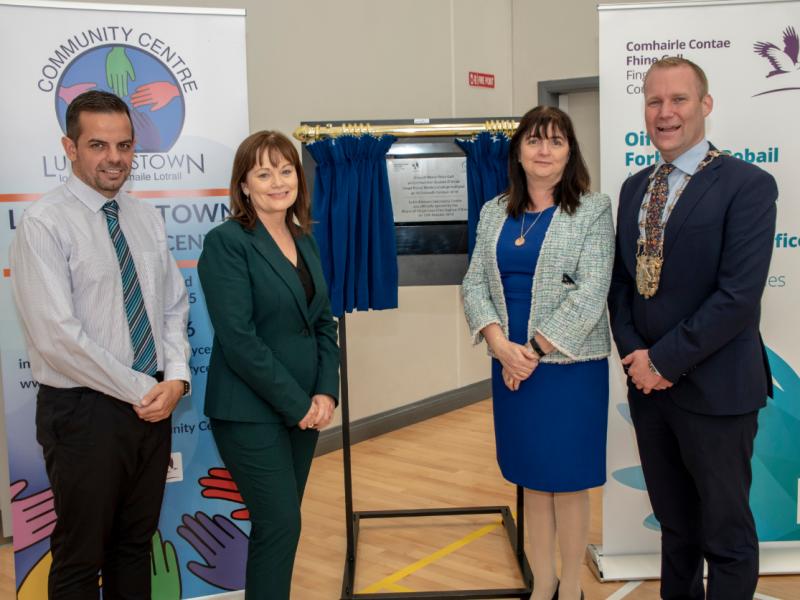 The official opening of Luttrellstown Community Centre, a new multi-purpose state-of-the-art facility which will provide a focal point for local residents and organisations, has taken place.

Mayor of Fingal Cllr Eoghan O’Brien, in the company of AnnMarie Farrelly, Interim Chief Executive of Fingal County Council, was on hand to open the wonderful new centre in the Dublin 15 area.

The Centre is located adjacent to Luttrellstown Community College and was constructed under the “Fingal Schools” model, which has been operating successfully across a number of communities since its inception in 2010.

Mayor of Fingal Cllr Eoghan O’Brien said: “Strong communities are a source of social support and well-being for the people who live in them.  It is vital therefore that communities have dedicated spaces for people to meet, convene, discuss and play.

“Fingal County Council has a major role to play in developing these communities of Fingal, and in particular newer communities like Luttrellstown, through the work of the Community Culture & Sports Division.

“Now, more than ever, there is a need for cohesion and a sense of community spirit and pride. Fingal County Council has been, and continues to be, committed to engendering this community spirit by the provision of new community facilities.”

Interim Chief Executive AnnMarie Farrelly said: “Fingal County Council has been involved in the design, support, operation and management of community facilities across the county for over 20 years.  In Luttrellstown we mark the official opening of a new shared community facility that will be a focal point for the local community.

“This new facility in which we are standing today is the result of a very successful partnership between Fingal County Council and the Department of Education & Skills and is a prime example of the “Fingal School’s Model”, a model which we are proud to have rolled out over the past number of years.”

Director of Fingal County Council’s Community and Housing Department Margaret Geraghty said: “It is wonderful to see the opening of this new community facility in this emerging area which will be of great benefit to residents and organisations.

“The focus of the Community Development Office is to develop strong, engaged and integrated communities across Fingal where people are proud to live.”