Fingal County Council has been forced to decommission playing pitches in Mulhuddart after vandals destroyed the playing surface. 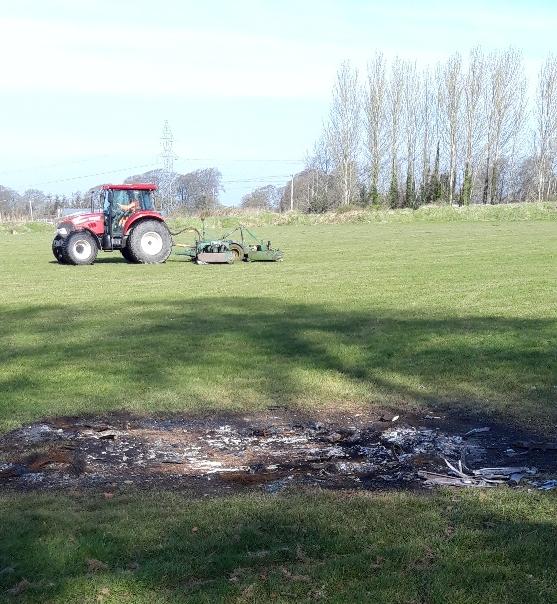 Skid marks from car tyres have left deep ruts on the surface at Danny’s Pitches, which means the pitches have been closed until further notice on safety grounds.

The pitches have been the subject of a number of vandalism attacks in recent weeks.

Two weeks ago, two burnt out cars had to be removed after vandals accessed the pitches after cutting the locks from two bollards to gain access. One bollard was subsequently repaired, while the second was never found following the incident.

On Wednesday (March 25), vandals again gained access to the pitches by removing the remaining bollard, and left deep skid marks on the surface.

Mayor of Fingal Cllr Eoghan O’Brien has condemned the incident. “This is unacceptable behaviour by a small minority. It is shocking to hear of this incident at a time when we are trying to concentrate our resources and services in dealing with the Covid-19 crisis. The knock-on effect is that the pitches will be out of action when they are reopened following the crisis, impacting the enjoyment of people at a time when they will be seeking a return to normal living after this difficult time.”

Director of Operations David Storey: “We have been left with no option but to decommission the pitches until further notice in the interests of health and safety. To hear of this incident during the Covid-19 crisis is very disappointing given that we are working hard to maintain our services to ensure the health and well-being of all our residents.”