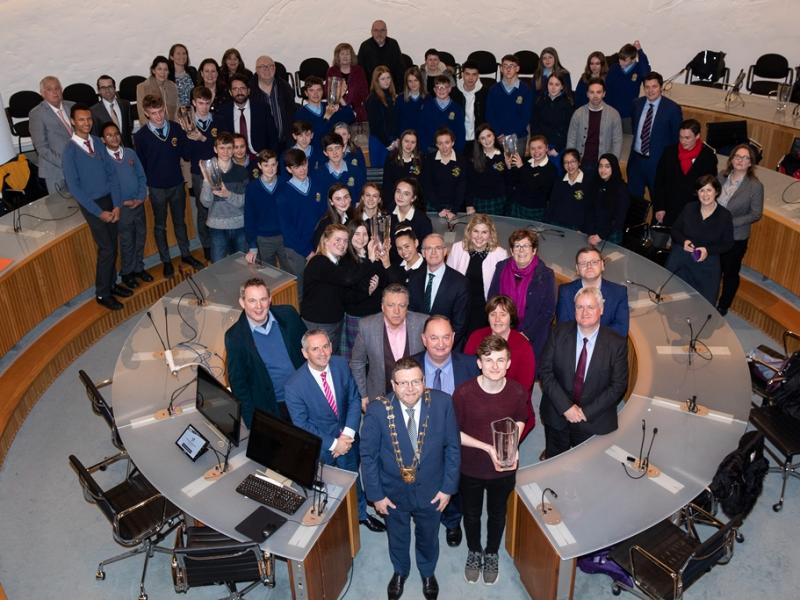 Fingal has celebrated the success of its students and schools in the 2019 BT Young Scientist competition, as Young Scientist of the Year Adam Kelly was recognised for his impressive achievement.

Tributes were paid at the event on March 11 (Monday) in County Hall, Swords to his family, his teacher Ms Lennon, and his school, Skerries Community College, for supporting and aiding Adam’s winning efforts.

Adam’s win continues a tradition of victory for Fingal students in this competition. In 2016, Maria Louise Fufezan and Diana Bura claimed the prize for Loreto Secondary School in Balbriggan.

It is a complex, emerging field with exciting technological and scientific applications, including the possibility of increased computing speed and power.

Following Adam’s victory in the all-Ireland competition, he will go on to represent Ireland at the European Union Contest for Young Scientists which will be held in Bulgaria this September.

Speaking at the celebration, Mayor of Fingal Cllr. Anthony Lavin said: “It’s highly encouraging to see so many Fingal students and schools getting involved and active in science.

“The discoveries made by Adam and the many other students who took part in the Young Scientist competition are already doing things that impact us all. From national to local issues, from climate change to commerce, we need the ingenuity and curiosity that these Young Scientists have shown.”

Fingal County Council Chief Executive Paul Reid congratulated all the students involved for their wonderful efforts in the 2018 BT Young Scientists and Technology competition. He said: “I would like congratulate everybody who was involved in this year’s competition. Fingal is in great hands.

“Fingal has the youngest population in Ireland. It looks like and sounds like, and the experience is, that we have the most highly intelligent population as well.

“It is particularly great to see young women studying STEM (Science, Technology, Engineering and Mathematics) subjects, and it is very important to bring that pipeline through in the years ahead.”

Fingal County Council has been active in promoting STEM to students and children, with Fingal Libraries hosting STEM Saturdays events in 2018 featuring coding, robots and engineering through LEGO.