Art brings out the best in us!

Artist Louis Haugh and educator Anne Bradley have been facilitating the most extraordinary creative workshops in unique locations in Portmarnock. 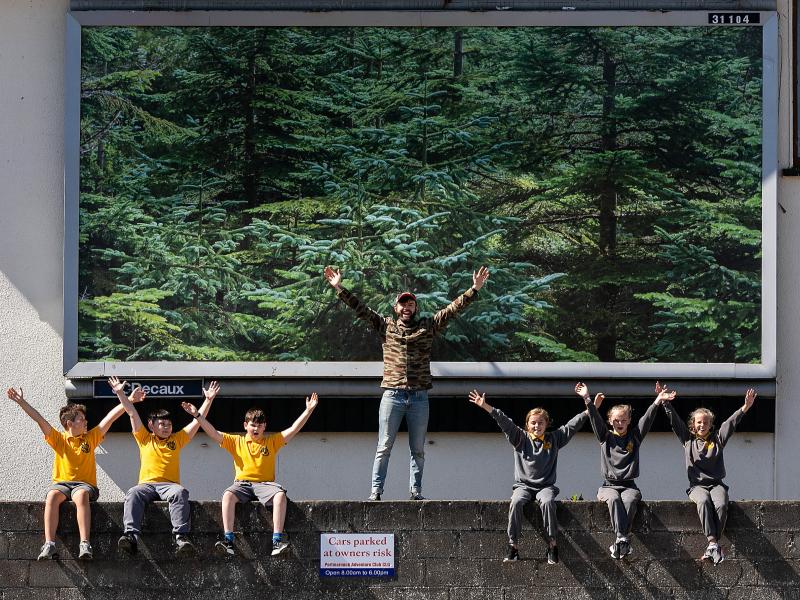 Artist Louis Haugh and educator Anne Bradley have been facilitating the most extraordinary creative workshops in unique locations in Portmarnock. The workshops with school children from St. Marnock’s National School form part of a new project titled, ‘If Trees Could Talk, commissioned by Fingal Arts Office on the occasion of Cruinniú na nÓg 2021.

This project invited children to explore the photographic work of artist Louis Haugh. The billboard titled ‘23.5km Southwest of Here’ on Strand Road was the first installation site, and site-specific. The title referenced the exact location Louis photographed in relation to Portmarnock and enabled children to view his work at a large scale. Several bus shelters in Portmarnock are currently activated with other compelling work by Louis, creating an art trail throughout the coastal town.

There are three essential elements to this project devised and delivered by Louis and educator Anne Bradley – large scale public photographic works, digital activity packs and classroom-based workshops with the artist. The project introduces children to Louis’ photographic works as a starting point for conversations about trees. These photographs are a result of Louis’ body of research on the history of commercial forestry in Ireland and how Sitka spruce plantations have shaped the Irish landscape for the last 100 years.

Anne and Louis are guiding the children in a series of engaging and practical workshops designed to explore several themes including botany, seed collecting, landscape, mythology and storytelling from indigenous North American culture where the Sitka spruce is a native tree. The children have experienced large-scale photography, drawing, mapping and artist lead discussions. Each child in the class has also received a multi-sensory discovery pack, crafted by Louis and Anne. It features activities to encourage cross-curricular learning inspired by Louis’ artwork.

Mayor of Fingal Cllr.  David Healy said, “Following a very demanding year of online learning and socialising, having the opportunity for safe live interactions was welcomed by the school, arts office and project creators. Anne and Louis’ idea to activate a billboard site as a space for learning was extremely resourceful, it's exhilarating to see the public space used in such a creative way”.

Julie Clarke Youth & Education Officer said, “Anne and Louis have delivered a phenomenal project, the children are completely captivated by them and this enriching learning experience. The publicly visible billboard and artworks have had a significant impact on the children, prompting so many questions about intellectual property, ownership, art and life. Artistic engagements like this provide moments for incredible dialogue between child and artist”.

Educator and project curator Anne Bradley said, “I just loved the first live session at the billboard! It was beautiful sunny morning and there was an air of excitement and expectation as we all gathered in the carpark – the children with their cushions brought from home and Louis standing up on a concrete wall in front of his photographic work of a Sitka spruce forest ‘23.5km Southwest of Here’. The performative and storytelling aspect of his presentation was so engaging for all of us. The children responded with such enthusiasm and participated with high energy. They loved the follow up activity of making their own billboard back at the school. We just had so much fun!”

Anne continued, “Together we explored key historical figures who influence Louis’ work including Anna Atkins (photographer) and Augustine Henry (Plant collector and Botanist), which led us to make a herbarium and observational drawings of plants.”

Speaking about the project artist Louis Haugh said, “Art and creativity hold an amazing potential for self-development, self-reflection and even an opportunity for escapism. Working on this project with Anne has been an incredibly valuable opportunity for me both professionally and personally, poignantly marking what I feel is a turning point from the previous 18 months. It has been a wonderfully enriching experience working so closely with the 4th class students at St. Marnock’s and their teacher Mr. Corkery. Their level of engagement, excitement, and significant critical thinking is astounding.”

Colin Corkery teacher commented, “the children thoroughly enjoyed venturing into the unknown each week. They were excited to meet Louis and had lots of questions for him every week about all aspects of his work and influences. Louis and Anne put a vast amount of work into the preparation of each workshop. The cyanotype printing session stood out as a favourite for the children, it was described as "magic" and "cool". Getting to work outside of the classroom with nature was especially important too. The children gained a huge appreciation for art and improved their observation skills. It has sparked their imaginations and will be a big highlight of the school year. An unforgettable experience.”

Speaking in advance of Cruinniú na nÓg this Saturday, Emer O’Gorman, Director Fingal County Council said, “through the work of the Arts Office and Fingal’s Cruinniú na nÓg Programme children are connecting with practising artists and learning about art and our environment through hands on and experimental sessions, we hope this ignites their curiosity and encourages a healthy relationship with nature and life-long learning”.