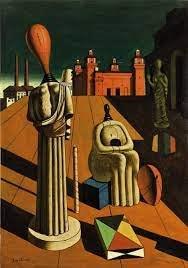 The Disquieting Muses is a painting by Giorgio de Chirico completed about 1917 during World War 1. But the influence of the war may have been minor in this case, given Chirico’s particular vision:

Everything has two aspects: the current aspect, which we see nearly always and which ordinary men see, and the ghostly and metaphysical aspect, which only rare individuals may see, in moments of clairvoyance and metaphysical abstraction . . . [It is the artist’s function to] document shifts in the continuity of the commonplace.

. . . in Chirico’s work, man is deprived of his soul; he becomes a manichino, a puppet without a face (and therefore without consciousness). In the various versions of his Great Metaphysician, a faceless figure is enthroned on a pedestal made of rubbish. The figure is a consciously or unconsciously ironical representation of the man who strives to discover the “truth” about metaphysics, and at the same time a symbol of ultimate loneliness and senselessness.

Of The Disquieting Muses the artist, Carlo Belli, wrote in a letter to the collector, Feroldi, in 1939:

[I]t is not the strangeness of the subject that makes this work a great thing; the marvel that can arise from the unusual positioning of the objects that make up the landscape is what determines the painting's worth. It is the conscious elevation of the human spirit to a higher plane, the carrying of this life into a superior zone where everything is order and light, philosophical silence and measure [...] put two human figures in place of the mannequins [...] the faces will have their own expression and that expression will inescapably drag the work onto a lower plane [...] the chronicle of psychological palpitation [...] holds the place which should be held by the sublime [...] The fantastic creatures that dwell in De Chirico’s landscape contemplate reality and pour into us the amazement they feel sitting at the edge of eternity.

– Quoted by Giovanna Rosario in ‘The Works of Giorgio de Chirico in the Castelfranco Collection.’ Metafisica, 2006.

Sylvia Plath appears to have interpreted the statue in the background as a muse also, although she/it doesn’t seem to have a darning-egg head, and is not given any symbolic item. The two identifiable muses are Melpomene and Thalia, the muses of Tragedy and Comedy, respectively, as indicated by the symbols of the staff and the mask. Plath reads them as threatening. I don't think their poses are particularly ominous, although Thalia (seated) does look self-satisfied. The other two figures appear more curious than malicious—but then, could you reason with them, or get them to see your side of the story?

In the following text, I give my reading-response to each stanza of ‘The Disquieting Muses’, breaking my text into lines quasi poetically.

Mother, mother, what illbred aunt
Or what disfigured and unsightly
Cousin did you so unwisely keep
Unasked to my christening, that she
Sent these ladies in her stead
With heads like darning-eggs to nod
And nod and nod at foot and head
And at the left side of my crib?

Echo of “Daddy, daddy”, but more formal and not a condemnation;
a cry of helplessness.
The second “mother” is lower case, making it generic.
What kind of mother are you?
The ill-bred aunt or the disfigured, unsightly cousin is heredity localised.
[See how “disfigured”, “unsightly” and “unwisely” share rhythm structure surprisingly precisely, like a gene replication.]
Genetics is what you must admit. These bad fairy ladies will stitch
themselves into the homestead with their replicant repetitions;
they will usurp my tutelage
and rock me into a dark world.
(Nod (nudge). Nod (push). Nod (There!))
Bold goddesses.
[Internal rhyme: “unsightly” and “unwisely” lls.3 & 4—how it appears and how it is done. End-rhyme: “stead”, “head”, “head” and “dead”: a moribund march.]
How will the tale end? Gather closely, children.

Mother, who made to order stories
Of Mixie Blackshort the heroic bear,
Mother, whose witches always, always,
Got baked into gingerbread, I wonder
Whether you saw them, whether you said
Words to rid me of those three ladies
Nodding by night around my bed,
Mouthless, eyeless, with stitched bald head.

Mother, you seamstress, you were able to run up the required texts like neat outfits.
For example, stories that turned my brother’s favourite teddy into a great hero.
[Heroes are people who can handle themselves.]
That was you, mother. You!
The bad selves in your world always [Cue petulance. Stamp foot.]
ALWAYS got their comeuppance.
They didn’t get to eat the children. Please tell me you said a spell
against these darned disfigured “ladies”
whose teeth don’t even show,
so I’m waiting waiting
for their absolutely unpredictable needle-point strike.

In the hurricane, when father's twelve
Study windows bellied in
Like bubbles about to break, you fed
My brother and me cookies and Ovaltine
And helped the two of us to choir:
"Thor is angry: boom boom boom!
Thor is angry: we don't care!"
But those ladies broke the panes.

When the wind (oh oh!)—or something—threatened to kill big baddish Daddy,
deprive him of all his sun-dominated moons and his oh-so-hermetic mindscape,
you said it was all going to be fine and angeled us into ritual insouciance
by sympathetic magic.
But those graceful humanoids, they were stronger. Were they wind?
They broke indiscriminately—the bread, the glass, the fever.
One concerted nod and there went Daddy’s windows.

When on tiptoe the schoolgirls danced,
Blinking flashlights like fireflies
And singing the glowworm song, I could
Not lift a foot in the twinkle-dress
But, heavy-footed, stood aside
In the shadow cast by my dismal-headed
Godmothers, and you cried and cried:
And the shadow stretched, the lights went out.

Oh those dainty, dancing dears,
bright sparks in their Moms’ gloom. I wanna be a star.
And so I went for it. But my feet wouldn’t do what I wanted.
Couldn’t see my way in the shadow of those mountainous genemothers,
watchers, programmers. My head became leaden as theirs;
my body seized. You were disappointed with me. I hurt you.
Where are you, Mother? Mother?

Mother, you sent me to piano lessons
And praised my arabesques and trills
Although each teacher found my touch
Oddly wooden in spite of scales
And the hours of practicing, my ear
Tone-deaf and yes, unteachable.
I learned, I learned, I learned elsewhere,
From muses unhired by you, dear mother.

You shouldn’t have praised me willy-nilly. Bad mother.
I had wooden fingers. I failed there.
You had the wrong words and the wrong focus.
I was left with those faceless maquettes and their mindless habits,
their dark, mute, malicious, thumping, headbanging ways.
Such bad judgement you had, to think your lies would turn me into something else.
No practising over and over could over-ride codes repeated
in the dark; they are autonomous, unreachable, undecipherable.
You had no control whatsoever, over anything.
But I found other better mothers
beyond you. I learned from them.
And so.
So there. And then

I woke one day to see you, mother,
Floating above me in bluest air
On a green balloon bright with a million
Flowers and bluebirds that never were
Never, never, found anywhere.
But the little planet bobbed away
Like a soap-bubble as you called: Come here!
And I faced my traveling companions.

Did I fall asleep? The curse, is it released?
You were an angel, mother, a good fairy in your fairy-tale book
with your gorgeous, bright illustrations.
Airy fairy, offering me a balloon for a head, totally off the ground.
Come back. What kind of idiot are you?
You’re in Neverneverland.
There’s no way I could bridge the distance between where I stood
and where you wanted me to be
and anyway, such happiness doesn’t exist, at least not for me.
Your balloon became hard, convex glass reflecting me,
then them, then me, then them, then me, heavy head, heavy head, heavy head.
Nodding off. Going nowhere.
[‘b’ alliteration: “bobbed”, “bubble”, “bluebirds”. (Oh, the musicals of the 40s and 50s.)]

Day now, night now, at head, side, feet,
They stand their vigil in gowns of stone,
Faces blank as the day I was born,
Their shadows long in the setting sun
That never brightens or goes down.
And this is the kingdom you bore me to,
Mother, mother. But no frown of mine
Will betray the company I keep.

All the time now, round and round, always and ever. They’re triangulating me.
History whispering History pulling at its long cord.
Megaliths. Monoliths. Unshiftable.
Anaerobic bosses. Twisted mentors.
All your fault, Mother, with your bad navigation, your false formulae.
I keep saying “mother” to nag you, the same as they do me
with their faceless, horrific nodding
and nothing else. They are my mothers.
My dark mothers. I've stitched a cloth over my face.
I’m expressionless. No expression is true except the dark one,
that old goddish nod, nod, nodding, shaking the world
while keeping it stock still.
Mother, mother, you b***, that’s it.

Máighréad Medbh’s most recent book, Parvit of Agelast: A Verse Fantasy (Arlen House), was shortlisted for the Pigott Prize in 2017. A new book, Imbolg, is forthcoming. www.maighreadmedbh.ie