A stormy night in a mysterious old mansion… A sudden knock on the door… A shadowy figure passes you in the corridor… It’s that time of year when our thoughts turn to the spooky and macabre.

In the 19th century, ghost stories were all the rage. Victorians lapped up spooky stories by Joseph Sheridan Le Fanu, Amelia Edwards and Charles Dickens. The Victorian fascination with death and spiritualism played a large part in their popularity, although at that time, it was traditional to tell scary stories at Christmas rather than at Halloween. However, by the end of the century, the public was growing weary of these supernatural tales.

Irish Society, a weekly paper which focused mainly on society events, anonymous gossip and news of the latest fashions, was first published in 1888.

In 1892, it printed an eerie story which featured Kilbarrack Cemetery, an ancient seaside resting place where the ruins of the late medieval Chapel of Mone, more commonly known as the Abbey of Kilbarrack, can still be seen.

By this time, ghost stories were almost passé and The Irish Society apologies for even printing the story “as ghosts are so common nowadays” but they had decided to print this “truest of true spirit stories.” They also caution that there are on record many similar stories in connection with Kilbarrack.

We are assured that the person to whom this curious event happened, the mysteriously named Mr. R., is “a well-known figure in the city” and “a gentleman of integrity.”

So, let’s have this Mr. R. tell his peculiar story… 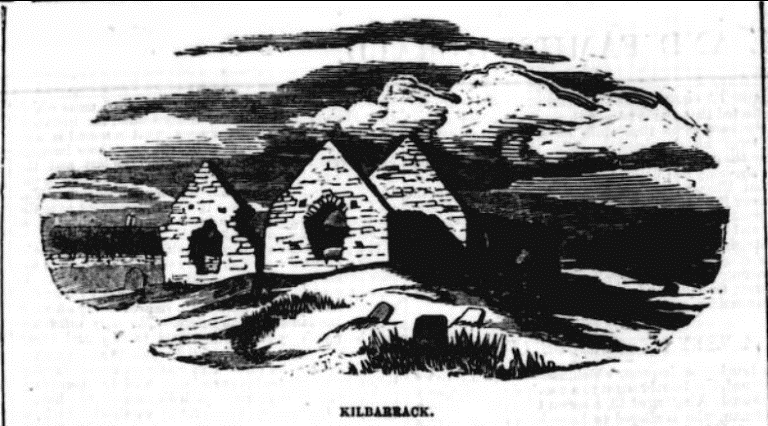 “I was on my way from Raheny to Howth. I had travelled from Malahide intending to catch the train at the Raheny station, but our train was some minutes late, and the consequence was I missed the Howth train. Not relishing the idea of hanging about the railway station for two hours I set off on my march to Howth, hoping I might catch the train at Sutton – and what a march it proved to be!

I was but imperfectly acquainted with the road, but I was confident that I would be able to strike the correct route having got directions from the railway porter.

I turned to the left and passed the little crescent of cottages soon leaving the cheery lights of the whitewashed public house in the rear, and having reached the main road, set off at a brisk walk, now plunging through lakelets of mud kindly left for the unwary traveller.

The road I had travelled was steeped in Cimmerian darkness which the bright stars failed to relieve. Now I had the music of the waves, the twinkling and flashing beacons that guide mariners up the river, and the lights that mark the townships on the south side of the Bay. Up to this time I had not met a single person, and the inhabitants seemed to have retired, although the hour was but a little past nine o’clock.

I mistook my bearings, turning up a lane that had six inches of mud over its surface, and did not learn of my mistake until I knocked smartly with my cane on the door of a comfortable looking house, half a mile up the road. After much hesitation one of the inhabitants, no doubt much wondering at the presence of a stranger in the vicinity, opened the door about six inches, and directed me to retrace my steps down the miry lane, and reach the main road. 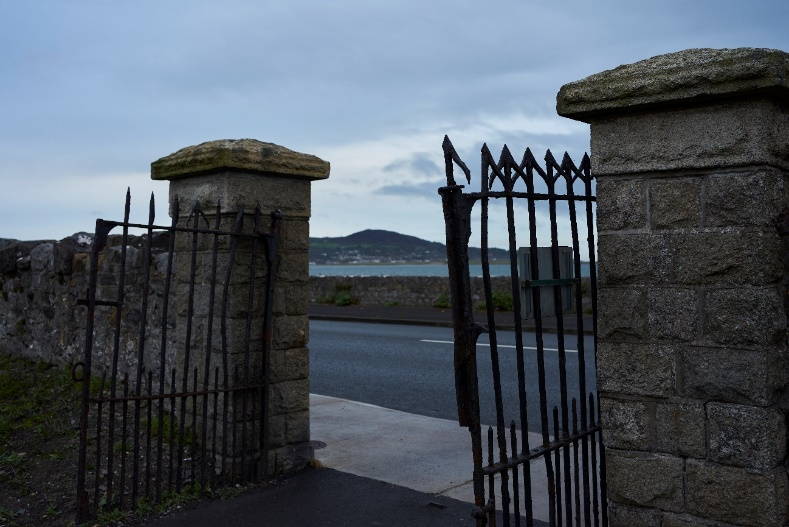 In half an hour I was again on the road and soon reached the creepy vicinity of Kilbarrack cemetery, with its numerous mounds and rude mementos of death, and its pointed ivy-clad ruins of a chapel, which looked doubly eerie under the stars, shadowed by the darkly looming hill of Howth, steeped in an oppressive stillness relieved only by the sea, that has been so many a dead man’s grave, and the occasional cry of the sea birds that seem never to sleep.

I was suddenly confronted by an old man dressed in quaint garb, and who had a rich luxuriance of lovely flaxen hair that matched a beard that reached below his breast. Taking him for the oldest inhabitant I politely inquired my way and offered him something for the information. “Keep your money, wayfarer”, the old man said, “follow me”.

He led me towards the graveyard, telling me on the way that he had watched me for some time and guessed that I had lost my road. I soon noticed that his gait was not that of an ordinary mortal, that his dress was that of a long bygone age, that his headgear was rather soldier like and then there was a sort of transparency and glow about his flesh which I had never before seen on a human being.

Yet, strange to say, I never suspected that he was other than ordinary man. He led me over the fence and across the graveyard. I, stumbling and plunging among the grassy mounds that covered the dust of past generations, he, proceeding with an apparent ease and steadiness – a fact which I attributed to his better knowledge of the ground. He led me towards the ruined walls of the chapel, and I followed free from suspicion. Arrived here, he by some subtle influence caused me to enter and I saw a sight that filled me with a strange feeling that was a mixture of awe and dread. 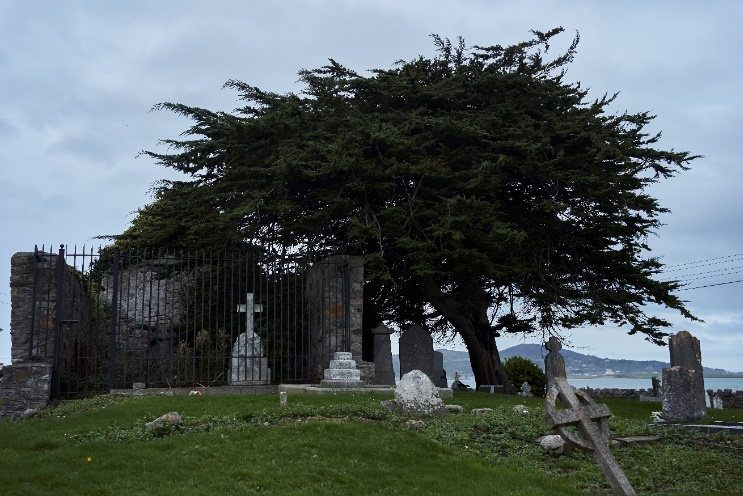 Seated among the rank growth of nettles and weeds that covered the ground, perched in the embrasures that served as windows, and one even on the apex of the gable, were a company of men who in every respect resembled my ancient guide. On observing them closely, as they sat in the dim starlight, I noticed that they all wore what seemed to be coats of chain armor and had the bearing of military veterans. I was greeted by them with cordiality and bidden to sit down on a boulder, which I did.

No sooner had I sat down than the earth seemed to open. The walls of the ruins vanished, I was forced into a vault-like opening, and was carried down, down, it seemed for miles, surrounded by the band of shady warriors, until I was suddenly dazed by a strange radiance when I fell into an immense grotto illuminated with many links that hung on the walls. Seated on an upturned cask was one who wore a brazen crown, whose locks were whiter and longer than those of the numerous company that surrounded him, and who was evidently a person of high degree.

This personage in a loud voice gave me greeting saying, “Welcome, stranger. By Thor! Thou shalt partake of our cheer and drink defiance to the foes of the Sea-kings!” I felt I was to be transformed into a new being. I drank of the stuff they offered me, and found that it rather burned my mucous membrane, yet had had no further effect.

The being on the cask raised a sceptre and those who reclined on the floor of the grotto or sat on the boulders of stone rose. “On with the dance,” ordered the commander and then began a wild war dance in which I was forced to join, becoming mysteriously armed with a battle-axe and sword, which I swung in imitation of others in the strange company. 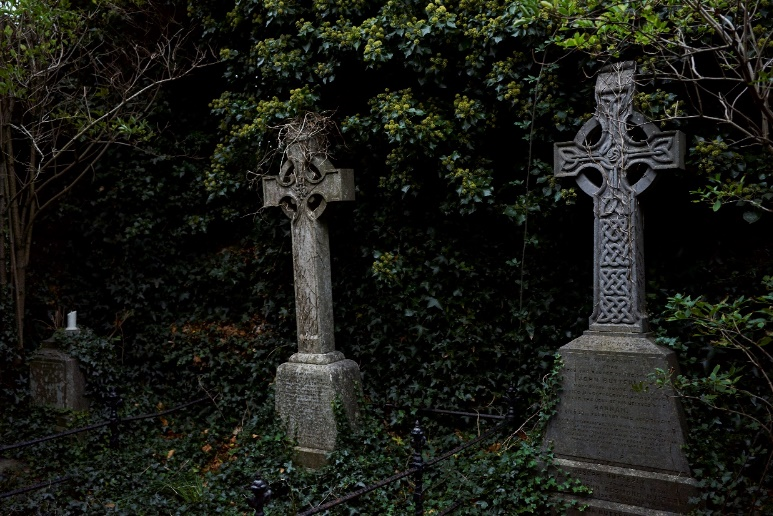 The dance over, the chief addressed his followers, telling them that an adventurer, Sir Amory Tristram, was on his way to attack the peninsula of Ben Edar to drive out the Danes, and exhorting them to be strong in the fight. He then asked me to address the warriors. I mounted a rock to do so and began – “Danes and warriors - you have always been brave in battle and fearless in the face of death. When opposed to the greatest of chieftains Brian Boroimhe…”

“Brian Boroimhe!”, yelled the company, “greatest of chieftains! Thou art enemy to our cause!” I was rash enough to make an uncomplimentary remark to the chief of the soldiers, whereupon I was forced up the shaft through which I had descended, hurried by the Danish spectres – for such I am convinced they were – and on reaching the ruins of the chapel I was subjected to rough handling (and footing too) and was sinking into unconsciousness when the chief of soldiers blew a long weird blast on a whistle, and the company disappeared. 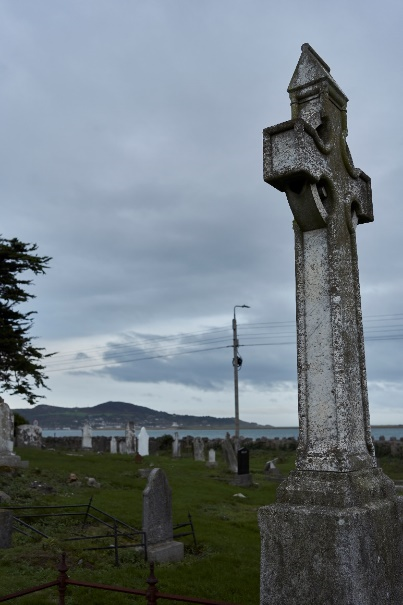 I awoke to find a coastguardsman bending over me, and on telling him of my wish to reach the railway he helped me to my feet, and, stiffened and sore, led by his direction, I reached the station in time for the train. I trembled in every fibre when the engine emitted a demonical whistle that vividly reminded me of the closing episode of my weird adventure.

Some of my friends suggest that I slept, others insinuate that I was the victim of material spirits, but I hold that I was thoroughly compos mentos and intend to consult the psychological savants.”

Whatever the real reason for Mr. R’s mysterious tale, I suggest that should you find yourself lost on a dim and misty night walking past Kilbarrack Cemetery, you avoid any strange, bearded apparitions who try to lure you into the ruins!