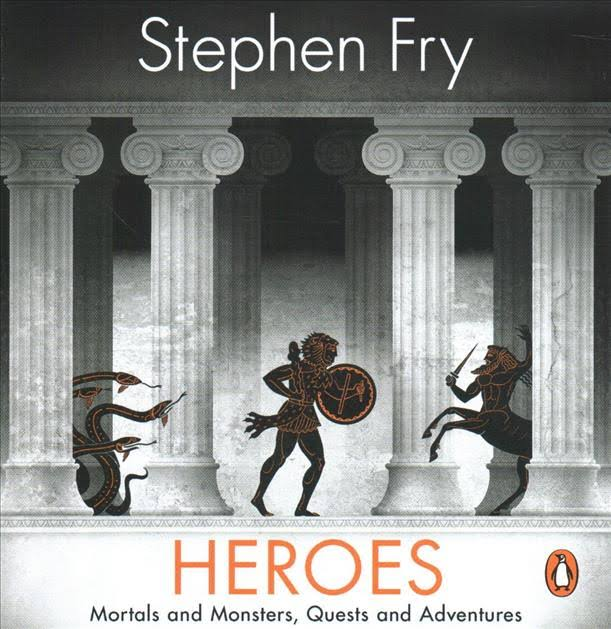 My favourite hero from Stephen Fry’s novel Heroes is Atalanta. I borrowed this book as a print copy from Balbriggan Library before lockdown, but it is available on Borrowbox through Fingal Libraries. She is the only female hero featured in the book and she is powerful and independent. She, like many Greek heroes, came from a harsh upbringing. Her parents were King Iasus and Queen Clymene of Arcadia. Despite being born into royalty, her childhood started off tragically. During the period she was born, girls were undesirable. Enraged that he did not have a son, her father left the infant Atalanta in the wilderness thinking that she would die. A mother bear who had just sadly lost her cubs came across the young girl and raised her as her own. She lived like a bear and knew nothing of the place she came from. She became an excellent huntress, but her most impressive quality was the speed at which she ran. She was found by hunters and was taken away back into society. She was taught how to speak, how to dress and how to operate in everyday life. However, she still spent a lot of time in the woods hunting and running. This was unladylike, but Atalanta did not care.

Atalanta was one of the best (mortal) hunters in the world. She offered to go with Jason and the Argonauts to find the golden fleece, but Jason declined because he believed it was bad luck to have a woman aboard the ship. The biggest quest she went on was the hunting of the Calydonian boar, which had been terrorising Calydon for years. Every year King Oeneus was supposed to sacrifice to the gods, but one year he forgot to make a sacrifice to the goddess of the moon and the hunt, Artemis. As punishment she sent the boar to Calydon. In an effort to save themselves, the people of Calydon built walls to keep them inside and the boar outside, however this meant food was harder to get and hunger soon kicked in. The men on the quest doubted her skills and her right to be there, but Prince Meleager of Calydon allowed her to join. There was a reward set for the hunter who drew first blood, and the hunters set off on their quest. Showing archery skills levels above anyone else on the hunt, Atalanta drew first blood and triggered the boar's death. Despite being the one to kill the boar, the prince decided that Atalanta should get the boar’s pelt, as he had fallen in love with her. Unfortunately, this did not go well for the young prince or Atalanta. The prince’s uncles who were also on the hunt, were unhappy with this result. In a fit of rage, Meleager killed his uncles. Years before, when the prince was born, the fates visited Meleager's mother and gave her a piece of wood and informed her that as long as the brand inside the wood wasn’t harmed, her son would live. The prince’s mother found out the harm he had done to his own family, and in a state of grief, disgust, and anger, she threw the wood with Meleager's lifeline that she had been saving for years into the fire. She immediately regretted it, but the damage was done, the prince died quickly. Devastated, Atalanta left the town without her reward.

After hearing rumours about the girl, King Iasus (her father) determined that the girl must be his daughter and had misjudged her potential just because she was not a boy. He reached out to her and welcomed her back into the kingdom. Atalanta did not trust the man or have any desire to follow his commands, so when he told her it was time for her to get married, she informed him that she would not do it if it were not on her own terms. Happy that she was agreeing at all, her father promised that she could decide who was best suited for her, however Atalanta had no desire to ever marry. She worshipped the goddess Artemis above all the other Olympians and believed that women were just as happy living on the hunt as they were married. She decided to set a seemingly easy but in reality, borderline impossible test to see who her suitor would be. She took this proposal to the racetrack stating that the first man to beat her in a race (with a ⅓ head start), would win her hand in marriage. If they could not beat her, she had every right to kill them. Gleeful, her father accepted these terms, knowing little of Atalanta’s full skill. The first day of the races came and princes, the wealthiest that Greece had to offer, and powerful men from other countries came to take part. It was a bloodbath. One by one each suitor would come, and each would die before reaching the end of the track. The news spread far and wide. Each day more suitors would show up and more would die. Her father, while unhappy at her not having found a suitable partner, was more than happy at the boost to the economy now that people were travelling just to see his daughter kill suitor after suitor. It soon became clear that Atalanta had secured her maidenhood forever. Soon, someone would change that.

A suitor by the name of Hippomenes (otherwise known as Melanion) came to watch Atalanta’s races the day before he was due to run. He spoke with her briefly at the end of the day. She felt a strange feeling of remorse for the boy that she had not felt for any of the others. He fell in love with her instantly and decided to take matters into his own hands. He prayed to the love goddess Aphrodite, begging her to help him. The goddess was happy for the attention and gave the boy three golden apples. She instructed him to throw the apples when Atalanta was just behind him. Sceptical but willing to try almost anything at this point, the boy thanked the goddess and promised to sacrifice something to the goddess after. The race between Atalanta and Hippomenes came, and the boy brought the apples as instructed. The first time he heard the knife being drawn out of its sheath, he threw the apple in desperation. To everyone's surprise including her own, Atalanta went chasing after the apple and he was back with a good lead. This happened two more times and he won the race. Annoyed by the apples but strangely happy with the suitor, she agreed to marry him. Although this appears to be a happy ending, such things were not possible for Greek heroes. Hippomenes forgot to sacrifice anything to Aphrodite after he won due to being lovestruck and unable to concentrate on anything but his wife. The goddess was furious and turned the happy couple into a pair of lions. No one knows what became of these lions.