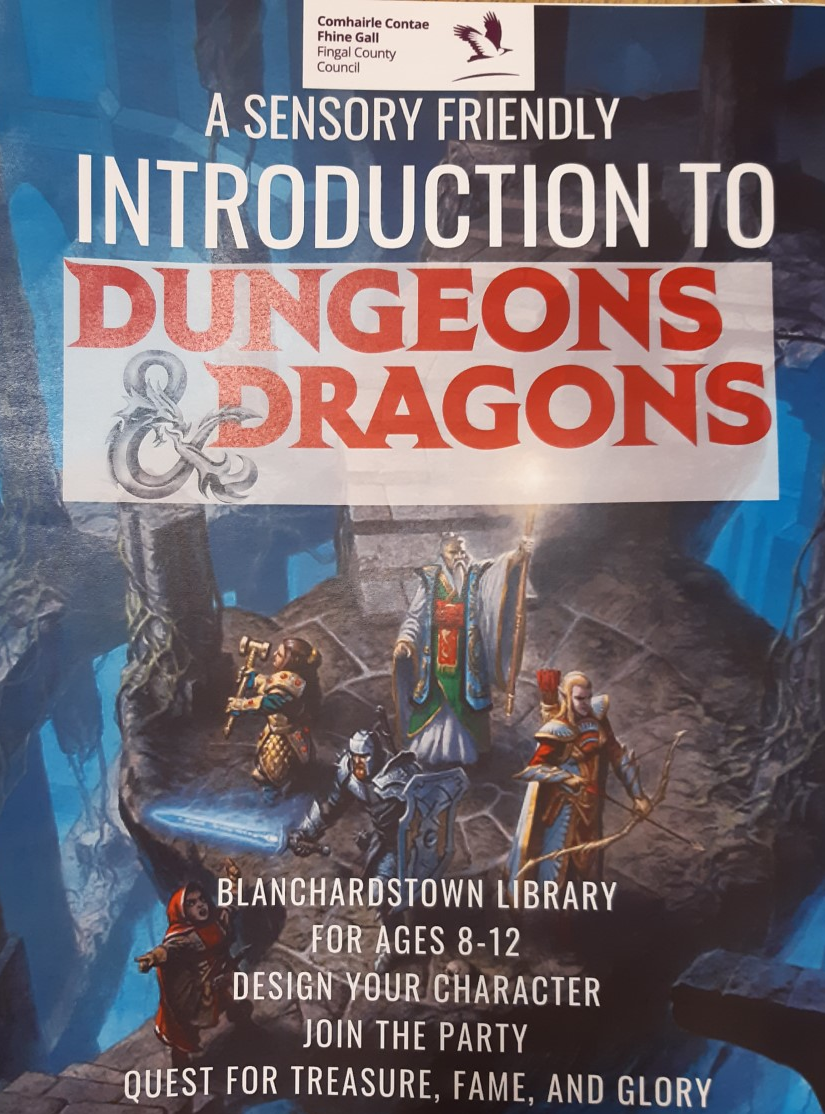 Marc from Blanchardstown Library takes us through the first 2 online DnD sessions run by Fingal Libraries recently – one for juniors and one for adults.

I had been running DnD games in the branch prior to the outbreak of Covid-19. The first two sessions with 8 children were successful and a second run of games was planned for the summer months, but these were subsequently cancelled. I set up this pilot scheme by contacting parents from my waiting list for those games. My colleague, Ciara, obtained the Stranger Things themed DnD Starter Set as a prize in a competition that we never got the chance to run. So, instead, it has been put to use for this series of online games. 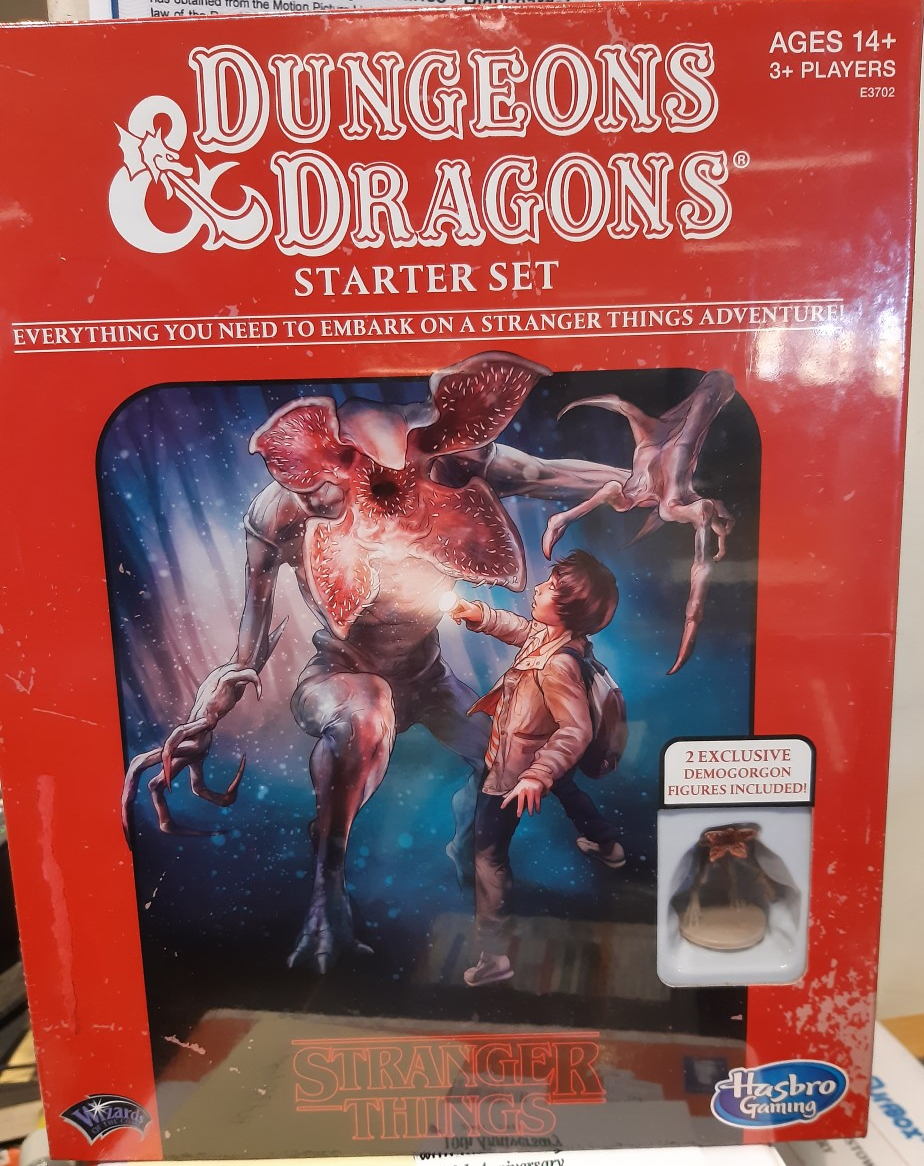 I had set up a Fingal Libraries Discord channel for Ireland’s National Science Fiction Convention, Octocon, earlier in the month. Using this app, we can communicate using text and voice chat in real time. I have been in contact with the parents for a number of weeks and the children were very excited by the prospect of playing.

The pilot session is made up of four 90-minute games happening weekly at 17.00 on Wednesdays. I logged in at 16.55 and some of the players were there already.  I sent each participant the YouTube unboxing video that Ciara and I had made, as well as the three-part character creation video that I had filmed for Blanchardstown Library’s Online Comic Con back in August.

The Starter Set comes with pre-generated characters for instant play, but two of the players had created their own characters from scratch which I was very impressed with. One of them had even followed along with my videos to design his character.

After the initial, and very minor, technical difficulties, the game ran smoothly. I used the Push To Talk function at first, but I found it was easier to leave the Voice Activated Mic on since I need both hands free to make notes and to roll dice. At one point the audio went very quiet but I exited the program and when I restarted, the issue was resolved.

I didn’t have to offer much tech support with Discord so we were able to move quickly into introductions and character creation. 6 of the 7 characters had characters ready, either the pre-gens from the box sets or their own designs. Ordinarily most of the first session would be taken up designing characters so this saved a lot of time. I went round the group and we introduced each other, and our characters, and we were able to dive right into the adventure.

The characters were called together by a local lord to eliminate a monster that had been terrorising the town. They gathered tools and mingled with the locals to get information on the creature. So, with healing potions, magic wands, and black metal swords in hands, our party is eagerly awaiting part 2 which, because of the midterm break, will happen in 2 weeks.

There was a collective “aw!” when I had to announce that time was up, so that bodes well for the next game. I got some feedback from parents afterwards who said the children were enraptured for the duration of the game so I’m feeling encouraged to continue with these events.

The social and therapeutic nature of tabletop role-playing games has been documented around the world and, during these trying times, escaping to an immersive world of fantasy and thrills is just what we need. 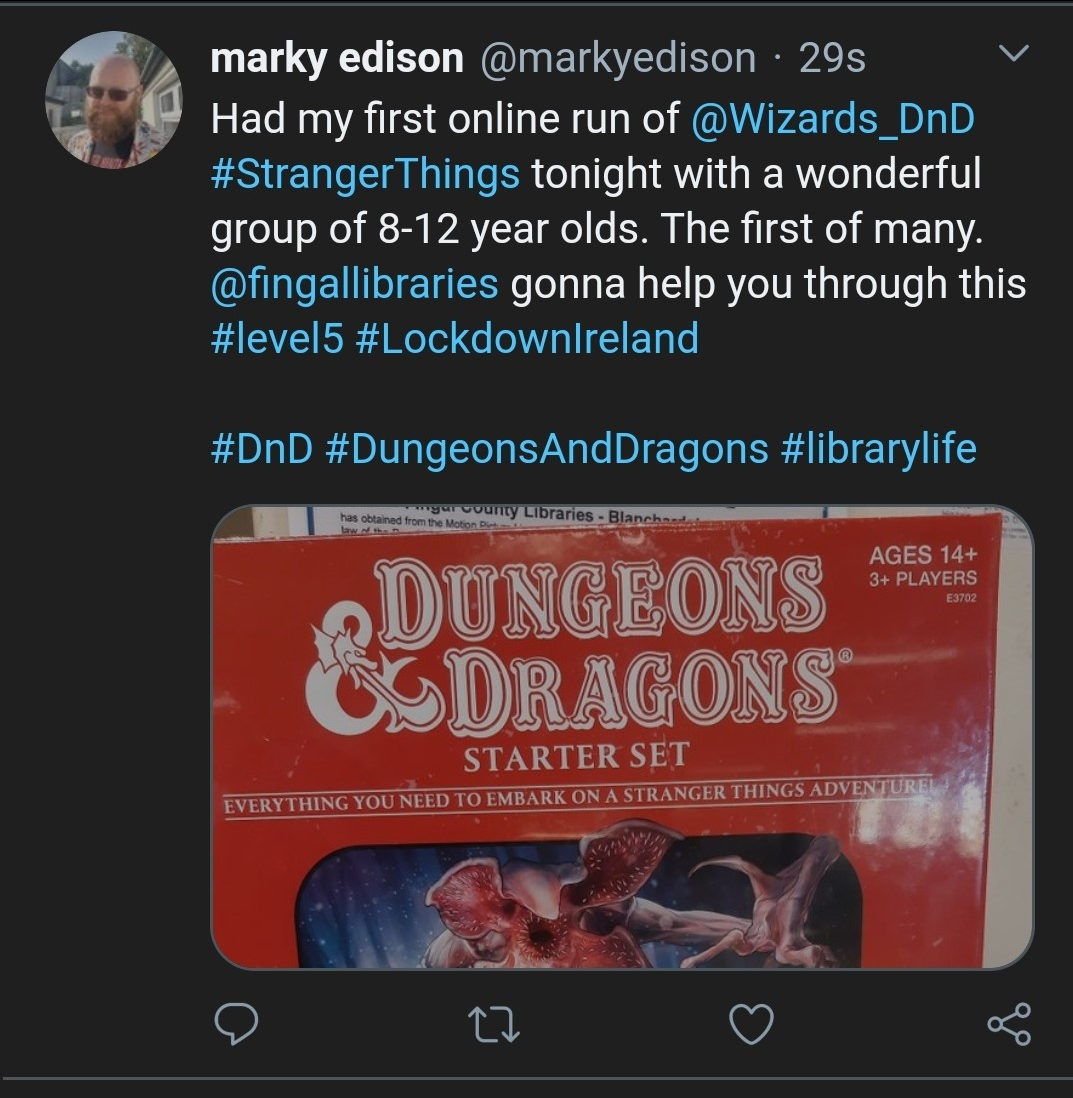 Alongside the sensory friendly introduction to DnD for children, I am running a pilot scheme for an adult group. Again, we are using the Stranger Things themed starter set. Like the children’s session, this is a series of 4 games played weekly for 90 minutes. The adult players all created their own characters. One of them had played the game before but the other 3 were playing for the first time.

The opening of the quest gave the players an opportunity to test their improvisation skills. Our human rogue, Scumbag, and our wizard, Sugarstorm, both have animal familiars. So, to provide a nice symmetry to the party, Portensia, a changeling, is acting as an animal companion to the remaining player, Zeph.

In her chosen form of a crow, Portensia and Sugarstorm had a heated debate about the nature of the team. Sugarstorm volunteered to lead the party while the changeling argued for a non-hierarchical collective. Sugarstorm used her psychic powers to penetrate her teammates mind but was horrified by what she saw and yielded to the majority.

The tone of every DnD game is unique. It stems from the personalities of the players. This particular game is shaping up to be fun. There are strong stubborn players, cunning streetwise players, and strategists. On top of that, there is a strong humorous vein permeating the game so far.

In this period of physical and social isolation, it was refreshing and exhilarating to be in the company of like-minded adults. With no distractions and the tyranny of the outside world left behind, the freedom to express ourselves and to laugh, argue and play together was a rare treat. The mood in the virtual room felt light, airy, and communal. Welcoming others into our world is something that we may have taken for granted pre-covid. Now it feels necessary. These games are welcoming, inviting, and vital.

After launching both the children’s and adult’s games successfully, it feels important that this avenue of community remains open in the future. There has been much debate about what constitutes an essential or critical service lately, and in a post-covid world, this feels important in reestablishing human connections after an extended period of isolation.

The next junior session is now full.

Free tickets for the next adult DnD session are available through the following link: https://www.eventbrite.ie/e/introduction-to-dungeons-and-dragons-for-adults-tickets-127124024379?aff=erelpanelorg